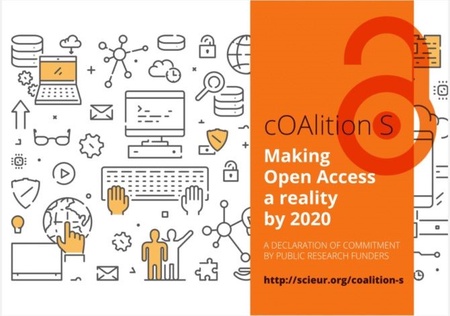 The University of Aberdeen encourages the publication of its research outputs in Open Access form and this is a requirement both of REF2021 and an ever increasing number of research funders. An international coalition of funders is working towards a transformational and sustainable Open Access model, called Plan S, which has been subject to widespread consultation since its launch in 2018. The University of Aberdeen submitted a response to this consultation, representing both academic and professional views on the proposal.

A new version of Plan S was released at the end of May and it responds to the concerns expressed by universities, researchers, publishers and learned societies. Read more about the changes, and our new service to support you with Open Access publishing, here.

Plan S was launched in September 2018 by cOAlition S (a global coalition of research funders) in order to effect a decisive shift to Open Access (OA) for the research that they fund. Despite a number of initiatives in recent years, these have been at the national level and different approaches have made them hard for researchers to understand. They have not provided sufficient incentives for researchers, institutions, funders and publishers to make all the changes necessary to make a full transition to OA. Members of cOAlition S include the European Research Council, UKRI, Wellcome and the Bill and Melinda Gates Foundation.

Plan S has two primary objectives: to recognise the importance of open research (often referred to as open science, but intended to apply more widely to academic research) and ensure that funder policies require and support it; and to address longstanding and substantial financial pressures caused by the combination of year on year journal subscription increases and the emergence of article processing charges (APCs), known as Gold OA, as the preferred option.

The release of the first draft of Plan S in 2018 caused concern amongst researchers, publishers and universities as the proposals had the potential to be very expensive, and to create unintended consequences. There were particular misgivings in relation to the possible impact on small and society publishers, the implications for research outputs in other forms (particularly monographs), and the potentially significant expense associated with moving to full Gold OA by removing ‘hybrid’ journals (where both subscription and OA options are offered). The University of Aberdeen emphasised these risks in its response to the consultation.

The revised proposals respond to key concerns from the community. In particular, they address the need for more time by extending the timeline by 12 months to 2021, so research outputs resulting from funding calls from 1 January 2021 will need to comply. Additionally, publishers now have until the end of 2024 to make the transition from subscription business models to full OA.

A rationale for the revisions is available on the cOAlition S site.

It is expected that cOAlition S members will make their own decisions on the way that they choose to implement Plan S. UKRI announced in April that there will be a public consultation later this year as part of a review of their OA policy and have previously indicated that they do not feel bound to implement it exactly as it is written.

On 31 May 2019, The Wellcome Trust announced that they will align their policy with Plan S and as a consequence have extended their own deadline by 12 months in the same way. This is helpful both in terms of allowing more time and by reducing the issues caused by multiple funder policies with differing implementation dates.

The University Library will continue to work with Jisc and other research libraries to engage funders and publishers as policies continue to evolve.

Digital & Information Services, in conjunction with Research & Innovation, are pleased to announce the launch of a Scholarly Communications Service which will provide support and advice in relation to all aspects of scholarly publishing. Questions and comments about this briefing, and any other related matters, are very welcome at scholcomms@abdn.ac.uk.