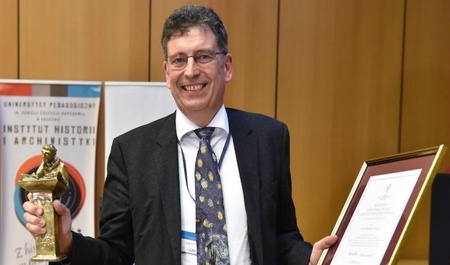 A leading historian from the University of Aberdeen has received a top literary prize in Poland for his work on the country's history.

Professor Robert Frost’s The Oxford History of Poland-Lithuania: The Making of the Polish-Lithuanian Union, 1385-1569, was awarded the Pro Historia Polonorum prize by the Polish Historical Association.

The prize - which is worth £4000 - is awarded every five years for the best book on the history of Poland or East Central Europe written in a foreign language by a non-Polish author.

The only English language study of its kind, and the only study in any language since 1919, the book demonstrates the importance of the Polish-Lithuanian union for an understanding of the politics not just of modern Poland, but also of Ukraine, Belarus, and Lithuania, and of the later formation of the Germanic states.

Professor Frost received his award from Stanisław Karczewski, the Marshal of the Polish Senate, at the opening ceremony of the III Congress of International Researchers of Polish History in Cracow, involving 250 historians from 37 countries.  The book was chosen from among 165 nominated by Polish historians.

Commenting on his award, Professor Frost said: “My book was chosen from among 165 nominated by Polish historians, so I was of course delighted to receive this kind of recognition from my peers.

“I would like to thank those who nominated my book, and the Polish Historical Association, and the Senate of the Polish Republic for this signal honour.”