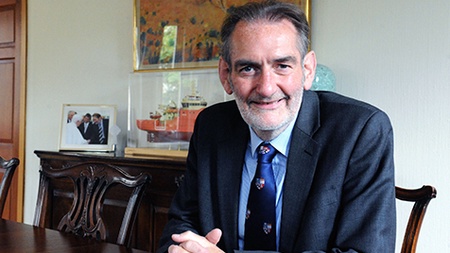 Professor Sir Ian Diamond has announced his intention to retire from the position of Principal and Vice-Chancellor of the University of Aberdeen and has invited Mr Martin Gilbert, Senior Governor to commence a global search for his successor.  Sir Ian has agreed to stay in post as Principal and Vice-Chancellor until his successor takes up appointment.

In addition to being Principal and Vice-Chancellor of the University, Sir Ian over the last seven years has chaired a number of important higher education committees including Universities UK’s Research Policy Network, Universities Scotland’s International Committee, Funding Policy Group and Efficiencies Task Force.  He is Chair of British Universities and Colleges Sport and Vice Chair of the Universities and Colleges Admission Services. He has undertaken a major review of higher education funding and student finance in Wales and also led the Universities UK Efficiency and Modernisation Taskforce. Sir Ian is a Trustee of a number of independent charities. He was commissioned as a Deputy Lieutenant of Aberdeen in 2013 and recognised for his services to social science and higher education with the award of a knighthood in the Queen’s New Year’s Honours list 2013.

Mr Martin Gilbert, Senior Governor of the University Court said: “’Sir Ian has agreed to continue to lead the University of Aberdeen while we conduct a global search for a new Principal. Sir Ian has been an outstanding Principal who has taken on many difficult challenges and accomplished a great deal over the last seven and a half years, that will lead to the further advancement of the University as one of the nation’s finest higher education institutions’’.

Commenting on his announcement, Sir Ian said: “I have thoroughly enjoyed my time as Principal of the University and I am fortunate to have led a dedicated team of colleagues in every corner of this great institution; together we have introduced major innovations.  The University is in very good shape and I believe the time is now right for my successor to build on the firm foundations with which I leave the University.”

The Court of the University will shortly commence the process to appoint a new Principal.