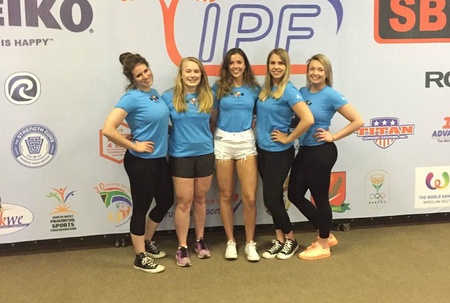 The University of Aberdeen's girls' powerlifting team are officially among the best in the world following their success in a major international competition.

The team represented Great Britain in July’s International Powerlifting Federation (IPF) World University Cup in South Africa, where they finished in fourth place and achieved the highest Wilks score of all the female teams.

AUWC girls are the only Scottish team of lifters to ever qualify for the event, following their success in April’s Scottish University and Colleges Powerlifting Championships, where they finished first.

The team of five lifters - Eve Fordyce, Molly Tweedle, Jennifer Newton, Annina Jansson and Nina Lepaus – narrowly missed out on a top three finish in South Africa having drawn on points with Rutgers University, only to miss out due to Rutgers’ greater gold medal haul.

Their strong finish came as a result of some outstanding individual performances, with a clutch of bronze and silver medals across a variety of events and weight classes.  The result represents a huge improvement in the team’s performance, putting them in the top five in the world and second best in Europe.

Commenting on their win, AUWC Captain Molly Tweedle said: “Having the opportunity to participate at the World University Cup was a great experience, and showed us how far we have come together as a team.

“We also received many kind donations through our GoFundMe page and various fundraising events, which along with the financial backing we received elsewhere made it all possible.

The club has been such a huge part of my experience at the University of Aberdeen and I simply could not have asked for a better way to end my captaincy" Molly Tweedle, AUWC Girls Captain

“The club seems to be getting bigger, better and stronger every year, and I am really excited to see what the future holds.

“The club has been such a huge part of my experience at the University of Aberdeen and I simply could not have asked for a better way to end my captaincy.”