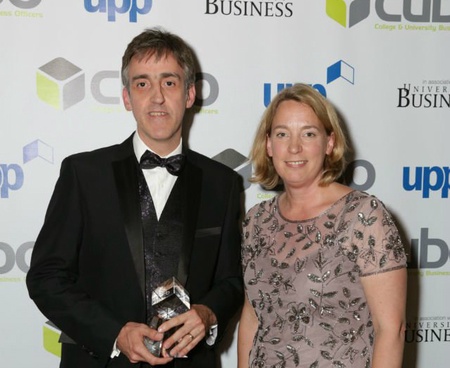 The University’s Head of Commercial Services has been named Business Manager of the Year at an annual award ceremony which recognises the achievements of those working in the higher education industry.

Calum Maclachlan scooped the award at the CUBO (College and University Business Officers) Awards, which was held at the University of Kent on Wednesday, June 28.

The awards, which are open to all higher education institutions, are judged initially by the CUBO Awards panel which shortlists candidates in each category. CUBO members then have the opportunity to vote for the winners in an online ballot.

Calum said: “To be judged so positively by my colleagues and peers and winning this award, is truly humbling and is perhaps one of the proudest achievements of my career so far. Winning it is also a reflection of the benefits, knowledge and best practice experiences I've enjoyed learning and hearing about during my time as a CUBO member.

“To my colleagues who voted for me, my sincere thanks are extended and of course my success is only possible because of the great work undertaken by my colleagues in Aberdeen who, at every turn, make me look as if I know what I'm doing. My grateful thanks are offered to them too."