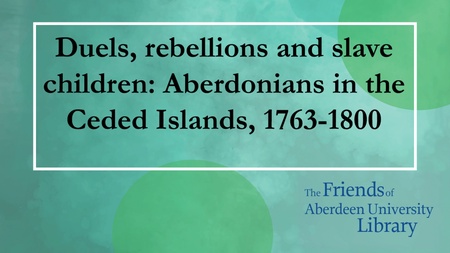 Evening lecture organised by the Friends of Aberdeen University Library

Join Dr Désha Osborne as she discusses Aberdonians in the Ceded Islands in this evening lecture.

On the 7th October 1763, at the end of the Seven Years’ or French and Indian War, the West Indian islands of Dominica, the Grenadines, Tobago, Grenada and Saint Vincent, along with East and West Florida, were ceded by the Treaty of Paris to British control.

In the years that followed, these colonies and territories experienced a surge of emigration from the North-East region of Scotland. The talk will lives of two of these settlers – and of their mixed race children whose mothers were African slaves – found hidden within the archives of the Special Collections Centre. From an infamous duel with the National Hero of Saint Vincent, to the lost inheritance of another, Scotland’s relationship to Empire at the end of the eighteenth century is echoed by the lives of these Aberdonians and their families.Organised by the Friends of Aberdeen University Library