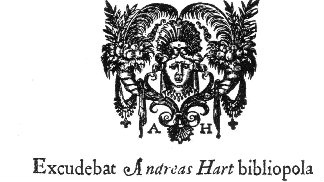 Though he never became king's printer, Andrew Hart was the most successful Scottish book printer and publisher before the Restoration. This talk will trace his career as agent of religious nonconformity; as commercial opportunist with various continental and English collaborators, and as publisher of John Napier of Merchiston.

As part of its bookbindings exhibition, Cover Stories, the Special Collections Centre at the University of Aberdeen will be hosting a series of five talks that focus on some of the individuals behind the bindings.

Andro Hart (d.1621) emerges as a book merchant in the 1590s and as a printer in the first decade of the 17th century. Early in his commercial career he also became involved in the confessional politics of Scotland and England before the Union of the Crowns and was on several occasions arrested for association with Presbyterian clergy, writers and printers. None of that activity prevented him from developing sound business ties with the printers and book merchants of northern Europe and London and becoming sufficiently an establishment figure to be granted extensive publishing rights. After his death his widow Janet Kene continued the press and became one of the leading lights in the proliferation of female book traders in early modern Scotland. The 1633 Hart Bible, that is the cornerstone for this talk, is emblematic of both the press’s renowned quality and its less obvious sharp practice.

Dr Alastair Mann: After teaching in various capacities at the universities of Glasgow, St Andrews and Stirling Alastair Mann joined the Division of History and Politics in September 2005.

He is an authority on the early book trade of Scotland. This interest in the book trade developed from an earlier career as a book publisher and managing editor at Penguin Books in London in the 1970s and 1980s, after studying Publishing Studies at Napier University, Edinburgh. Subsequently, when he returned to Scotland for an academic career and did his undergraduate degree and doctoral thesis at the University of Stirling, it made perfect sense to continue that interest in the press and early publishing.

After obtaining his PhD in 1997, Dr Mann became a research fellow in the Scottish Parliament Project based at St Andrews University (1998-2005) which has produced, under the directorship of Professor Keith Brown, the major online resource The Records of the Parliaments of Scotland (rps.ac.uk) now hosted by the National Records of Scotland. This resource is now the premier online database for medieval and early modern Scottish history and is regarded as an international exemplar for such projects. Working chiefly on the period 1660 to 1707 he was co-editor of this project when it went live in 2008 and over the last decade has published widely on parliamentary history and the politics of seventeenth century Scotland, including The History of the Scottish Parliament, volume 2: Parliament and Politics in Scotland, 1567-1707 (2005), for which he is co-editor, and The History of the Scottish Parliament volume 3: Parliament in Context, 1235-1707 (2010), to which he has contributed two major chapters. In the light of his knowledge of the pre-1707 parliament he has advised the BBC on matters of ceremonial for the state openings of the new Scottish Parliament.

Meanwhile, in 2000 his monograph The Scottish Book Trade, 1500 to 1720 (2000) won the Scottish Saltire Prize as research book of the year, and he continues to publish on Scottish book history on subjects such as copyright and censorship, for example ‘The anatomy of copyright law in Scotland before 1710' in Alexander and Gómez-Arostegui (eds.), Research Handbook on the History of Copyright Law (Edward Edgar, 2016), a book intended for practising lawyers and judges as well as students of the book and intellectual property. He is also co-editor of the forthcoming History of the Book in Scotland: medieval to 1707 (2018).

In addition, and reflecting his interest in Restoration history, he has published a major biography of James VII and II, the first ever 'life' from a Scottish perspective, entitled James VII and II: duke and king of Scots, 1633-1707 (John Donald, 2014)

All talks are FREE and take place in the Special Collections Seminar Room on the Lower Ground Floor of The Sir Duncan Rice Library.