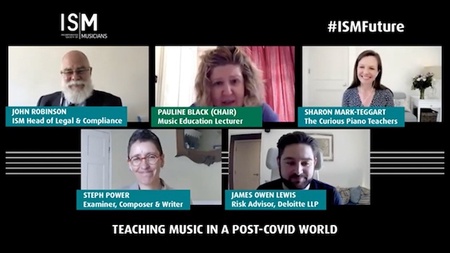 Pauline and Chris were lead contributors to the ISM's 'Building for the Future' conference on 24 April.

Two members of the Department of Music within the School of Language, Literature, Music and Visual Culture at the University of Aberdeen were at the forefront of a major online conference for musicians on 24 April. 'Building for the Future' was hosted by the Incorporated Society for Musicians (ISM), which represents musicians, educators and other music professionals across the United Kingdom. The event was attended by over 500 delegates, and included sessions on touring in Europe post-Brexit, on diversity and inclusion in the music profession, and on building a musical career in the digital space.

Musicians have been hit hard by the double-whammy of Brexit and COVID, but the profession is a resilient one. We will always need musicians!" Professor Chris Collins

A roundtable on music education during and after COVID was hosted by Pauline Black, co-ordinator of our BMus programme in Music Education. The session featured contributors from all four nations of the UK, who, as well as sharing insights and predictions about future challenges for the sector, celebrated the exceptional ways in which music teachers have adopted new pedagogies under lockdown.

Opening and closing words were provided by Chris Collins, Professor of Music and Head of the School of Language, Literature, Music and Visual Culture. Marking the end of his tenure as President of the ISM, Chris said, 'It has been an honour to lead the music profession through the most difficult year in its recent history. Musicians have been hit hard by the double-whammy of Brexit and COVID, but the profession is a resilient one. We will always need musicians!'

The entire conference was recorded, and can be viewed online.