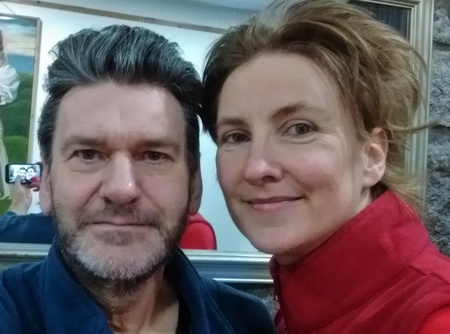 Artist Brian Keeley, PhD student in Film & Visual Culture, and fellow artist Bibo Keeley are about to start a new collaborative art project made possible by the Maverick Award from The Tom McGrath Trust. Their moving image piece will be based on Bibo’s private letters written during the months while she witnessed Brian’s critical illness in 2013. These letters will parallel Brian’s own harrowing memories of surviving more than 100 days without a functioning heartbeat, and the subsequent experience of receiving a heart transplant.

Brian Keeley is currently in his second year of his PGR - PhD in Film & Visual Culture. His research focusses on representations of heart transplantation in contemporary art and visual culture, and is informed by his own experience as a visual artist and as a heart transplant recipient.

Brian will soon begin working on a new audiovisual project in collaboration with his wife and fellow artist Bibo Keeley. The project is being made possible as the result of winning the prestigious Maverick Award by the Tom McGrath Trust. The Maverick Award recognises new writing-based projects which ‘depart from the routine and start to explore new and imaginative possibilities’.

Playwright Tom McGrath (1940 - 2009) was an award-winning and critically acclaimed playwright and poet, and a hugely influential figure in Scottish theatre. Many contemporary playwrights acknowledge a debt to him for the variety of his work and his enthusiastic support for others. During his long and distinguished career, he played an important role in the foundation of the Tron Theatre Club in Glasgow, precursor to the Tron Theatre, and later was the Scottish Arts Council's Associate Literary Director at the Royal Lyceum Theatre, Edinburgh.

The project which won the award will take as its starting point texts from Bibo Keeley’s contemporaneous letters to Brian Keeley over a period of 101 days while Brian was in Intensive Care in 2013. These texts describe, in a raw and unfiltered way, the impact of being suddenly thrown into a strange and frightening world without warning. These parallel Brian’s own memories of having a severe heart attack, and then gradually emerging from a coma weeks later. Brian was unable to move or speak, while life-support machines took over the functions of my heart, lungs and kidneys - until he was eventually stable enough to be put forward for a transplant.

The artists will revisit for the first time their written accounts of a long period when emotions swung from despair to hope, and from dramatic moments to the mundane.

Bibo and Brian are also delighted to be able to bring to this project the award-winning theatre director Susan Worsfold and her experience of realising autobiographical narratives through performance.

Now, we welcome the opportunity afforded by the Tom McGrath Award to work on this new collaboration. It will merge moving image, sound and spoken word to create a vivid and evocative account of the experience of critical illness from both sides of the intensive care bed.
This builds on previous work which Bibo and Brian have created in recent years as visual and performance artists - individually as well as collaboratively - which is informed by issues around the fragility of life, and the legacy of living with a heart transplant.

This collaborative approach to responding creatively to their shared experience began during the months they spent in Intensive Care in 2013. Bibo documented Brian’s illness and long post-transplant recovery in photography. The very first photographs were taken to allow Brian to see how his body was attached to the life support machines which he was unable to see from his perspective. The photographs after his transplant bear witness to each small step in his recovery. This body of work has been described as offering a unique insight into the patient perspective on critical care, and is being used by senior heart transplant surgeons in conferences and teaching environments around the world, to help better understand the impact that critical illness and transplant surgery has on patients as well as their loved ones. Brian also uses these images in his own lectures, including to students at the University of Aberdeen’s Medical School.

Brian and Bibo Keeley also use their lived experiences of transplant and donation in their role as Organ Donation Ambassadors in Aberdeen, which is an awareness-raising group set up by the NHS Scotland’s Specialist Nurses for Organ Donation team in Grampian. Now, in 2021 as the law on organ donation in Scotland changes to a presumed consent - or ‘opt-out’ - system, Brian and Bibo are looking forward to starting their new project made possible by winning the Maverick Award from The Tom McGrath Trust.

The Herald on Sunday article, 28th February2021 -
'A wife's love letters to her sick husband to form part of a unique art project':
https://www.heraldscotland.com/news/19122909.wifes-love-letters-sick-husband-form-part-unique-art-project/