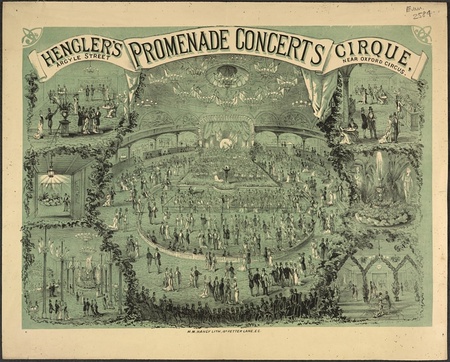 The talk, ‘In Memoriam Indoor Fountains: Promenade Concerts and the Built Environment’, will take place on 31 March 2021, 16:00 – 17:30. It’s free, online, and open to all but registration is required: https://www.eventbrite.co.uk/e/icmus-research-seminar-series-dr-jonathan-hicks-aberdeen-university-tickets-140262301319

The abstract for the talk follows:

‘Discussions of promenade concerts, at least in the UK, tend to run along one of two lines: either the format is emblematic of attempts to popularise classical music or (in the famous case of the Last Night of the BBC Proms) it is symptomatic of a contested cultural nationalism. In this paper I keep both discussions in mind while proposing an alternative line of enquiry, one that focusses on the place of promenade concerts within the broader urban environment. My point of departure is the pool at the Royal Albert Hall, an example of a curious (and not long since abandoned) architectural feature that was a fixture of musical promenading for over a century and a half. By pursuing the history of concert hall fountains back to the early Victorian period, and even further back to the pleasure gardens of the eighteenth century, the promenade phenomenon emerges not only as a site of social and political negotiation (as it has typically been described), but also as a staging post in the enclosure of hitherto outdoor spaces and an example of the Victorian desire to control the climate of public assembly.’