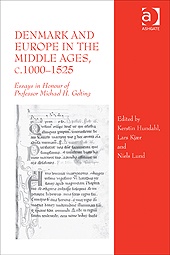 Ashgate have published a collection of essays, Denmark and Europe in the Middle Ages, c. 1000-1525, in honour of Professor Michael H. Gelting who holds a Chair in Scandinavian Studies at the University of Aberdeen. Michael H. Gelting has been one of the most influential historians working on medieval Denmark in his generation. On 24 September 2011, a large number of Scandinavian and British scholars gathered in the National Archives of Denmark in Copenhagen for a symposium in honour of Professor Gelting, organised on behalf of the National Archives and The Medieval Circle at Copenhagen University on the occasion of his sixtieth birthday.The essays in this anthology were developed from several of the talks from the day as well as a number of other contributions.

More information on contributors and the publication is available here.