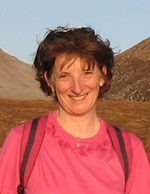 Congratulations are in order for history colleague Professor Marjory Harper who received news of a prize win and a prestigious invitation within a matter of weeks.

Marjory, Chair in History, received an invitation to take part in a two-day event on 8-9 August under the auspices of the Smithsonian Institution's Consortium for Understanding the American Experience and the Buffalo Bill Centre of the West, delivering a lecture and participating in a round-table discussion.  While in the US, Marjory is also to give a lecture in New York and Washington DC on her book Scotland No More? Emigration from Scotland in the Twentieth Century.  It was after receiving the Smithsonian invitation that Marjory received news that the book had been selected as the winner of the 2013 Frank Watson Book Prize.  In connection with this latter recognition, Marjory has been invited to present a keynote lecture on the topic of her book at the Scottish Studies Fall Colloquium at the University of Guelph on 5 October.

The Frank Watson Book Prize is awarded in alternate years for the best book or monograph published in the preceding two years.  In the letter notifying her of her achievement, the Chair of the Centre for Scottish Studies at the University of Guelph described Scotland No More? as “an excellent read, mixing new scholarship with some of your long-standing research in a most accessible way.”