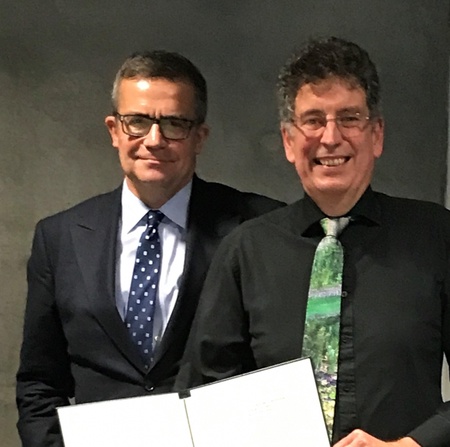 The University's Centre for Polish-Lithuanian Studies welcomed the Polish ambassador to the UK as part of a two-day international symposium.

Professor Piotr Wilczek, a distinguished scholar who specialises in Polish-Lithuanian Protestant culture and thought in the sixteenth and seventeenth centuries, was a panel member at the event held from September 30 to October 1.

The symposium explored ‘Natural Law, Religious Conflict, and the problem of War and Peace in Sixteenth- and Seventeenth-Century Europe’ and was held in the Craig Suite of the Sir Duncan Rice Library.

Professor Piotr Wilczek, currently the ambassador of the Polish Republic to the United Kingdom having served five years as Polish ambassador to the United States, was among a number of distinguished international scholars who joined Aberdeen historians for debate and discussion.

He also presented Professor Robert Frost with the diploma of appointment to a corresponding fellowship of the Polish Academy of Arts and Sciences (Polska Akademia Umiejętności), the equivalent of the British Academy.

The symposium was opened with a keynote lecture from Professor Frost (Aberdeen), who argued that Poland-Lithuania’s adherence to a Renaissance republican vision based on the Aristotelian notion of the mixed form of government meant that it failed to take its place in the new international system after 1648, which was increasingly based on developments in the law of nations, based on natural law, which emphasised the role of the abstract, sovereign state, rather than the republic conceived as a body of citizens.

Ian Campbell (Queen’s Belfast) considered the treatment of the Just War tradition in seventeenth-century European universities, providing a convincing and original argument concerning the clear differences between the Catholic and Protestant traditions.

Steffen Huber (Jagiellonian University, Cracow), who is visiting the Centre on a Bednarowski Trust Fellowship, looked at Natural Law as presented by Jesuits at Vilnius University against the background of social and confessional tension, arguing that, remarkably, the religious language of the debate followed time and again the philosophical function, and that Natural Law in Vilnius remained rooted in a multi-confessional religiosity.

Gábor Gángó (Erfurt/Padua) discussed the attempts of Christian von Boineburg, Chief Minister of the Archbishop of Mainz in the early 1660s, who sought to defend Hugo Grotius from the attacks of his Calvinist opponents, and to promote a genuinely Christian Natural Law in the Irenicist tradition.

Karin Friedrich (Aberdeen) considered the practical application of Natural Law in the cities of Danzig and Slutsk, in Polish Royal Prussia and the Grand Duchy of Lithuania respectively, in the context of Leonhard Fronsperger’s 1564 In praise of Self Interest, which argued that self-interest was compatible with the advancement of the Common Good.

Finally, Josh Racey, who is completing his MLitt in History, presented a paper on the eighteen-month Dutch occupation of London at the start of the reign of William III. He used records from the Old Bailey to show that the Dutch army did not apply martial law, but allowed cases involving Dutch soldiers to be tried in civilian courts.

The symposium concluded with a Roundtable, in which Professor Wilczek, Michal Brown (Aberdeen) and Guy Rowlands (St Andrews) drew out the implications of the papers for current debates on Natural Law and the Law of Nations, both for early modern Europe, and for today.

It was agreed that at a time in which Putin’s Russia is daily showing its contempt for the Law of Nations in its war against Ukraine, the thought of Grotius, Pufendorf, and Leibiz, is still highly relevant.