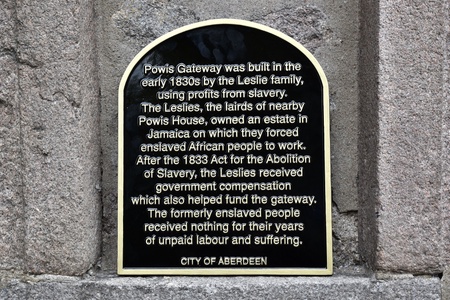 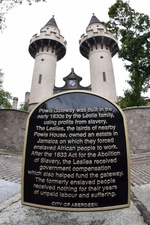 A plaque has been installed on Powis Gateway in Old Aberdeen as part of the recognition of the legacy of slavery in the University of Aberdeen and North-East Scotland.

The gateway, now owned by the University of Aberdeen, was funded by the Leslie family after they had received compensation when slavery was abolished in Britain’s Caribbean colonies in 1834. The plaque is part of Aberdeen City Council’s Commemorative Plaques scheme. Powis Gateway is a significant structure demonstrating that the proceeds of slavery flowed from the Caribbean to the North-East of Scotland and this was highlighted in 2020 Black Lives Matter protests with temporary banners.

The gates were built using wealth from plantations and compensation paid to the Leslie family by the British government of more than £7,000 (in excess of £600,000 today) for the loss of their enslaved ‘property’, while the formerly enslaved received no reparations for their years of unpaid labour and suffering.

In 2021 there was a temporary installation on the gateway by ceramic artist Helen Love and spoken word artist Noon Abdelrazig. Their collaborative artwork, “Quasheba / Powis Gateway Project / the Violence of Identity”, was commissioned by Aberdeen Art Gallery.

The Aberdeen City Council ‘Place’ plaque will be a permanent marker to highlight this history. The plaques commemorate people and places which have shaped the city, Scotland and beyond, or buildings or events of historic significance.

The addition of the permanent sign is part of on-going work to recognise the legacies of historic slavery at the University. A more detailed interpretation board is currently being created with input from students and the community, which will add greater detail about the history of the gateway and the legacy of slavery in Aberdeen.

The erection of the plaque forms part of a wider commitment to reveal and address the legacy of historic slavery and colonialism in the University of Aberdeen and the wider region.

In 2020 Dr Richard Anderson was appointed Lecturer in the History of Slavery and is completing a two-year research project which will reveal the financial and other legacies of slavery to the University of Aberdeen and propose ways in which this legacy can be addressed.

Dr Anderson said: “Powis Gateway is the most tangible link between the University of Aberdeen and slavery-derived wealth.

“It is important that this history is reflected more clearly so that all those who pass through the gates can better understand their legacy and the erection of this plaque is one step in this work.

“We recognise that much more is still required both in contextualising the history of the Powis Gateway, understanding and addressing the benefits which still exist today which were built on wealth from slavery and in decolonising our curriculum.”

’We consider this plaque as a puzzle piece to understand our university; as a piece of valuable evidence to help us trace and navigate the academic practices, culture, and knowledge that are embedded in the history of empire.

“The plaque invites us to engage in conversations of the legacy of empire in the university today. It gives us an opportunity to link the anti-racist and decolonial resistance in our community in 2022 to hundred years back as something that haunts us to this day.”

Councillor Alexander McLellan, Convener of the Council’s City Growth and Resources Committee said: “The Powis Gateway is a significant landmark in Old Aberdeen and I’m pleased that this commemorative Place Plaque has been installed as part of a wider commitment to recognising the legacies of historic slavery in Aberdeen.”

An exhibition exploring the legacy of slavery in the North-East will open in spring next year in the Sir Duncan Rice Library.

The University is also part of the Universities Studying Slavery (USS) network bringing organisations from across the world together to address the complicated legacies of slavery in the modern world.