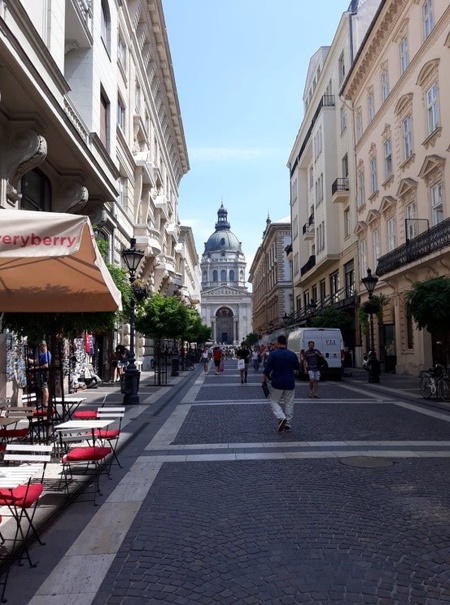 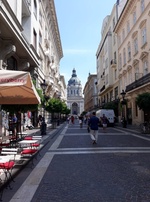 This summer I had the honour of representing the University of Aberdeen at the Annual Undergraduate Conference of the Central European University (CEU) in Budapest where I presented findings from my undergraduate dissertation on the representation of Highland emigration in the periodicals An Gaidheal and The Celtic Magazine between 1871 and 1883.

The topic of this year’s conference was ‘Migration, Exile, and Diaspora in Historical Perspective’. The conference was opened by Professor István Perczel (CEU) on Sunday evening. His keynote lecture on the Syrian Christians of India introduced me to an unfamiliar topic although it focussed on a methodological problem I had come across before. According to Perczel, most research on this Christian community in India was based on a text that had been written by the community in Malayalam, translated into Syriac, then sent to the United Kingdom and there translated into Latin; however, for the past century, historians used only the Latin version without questioning the adequacy of this translation. Upon examining the Malayalam source text and the Syriac version of it, Professor Perczel and his team realised that the Latin translation left out a large part of the text. This example of blind acceptance of translations done for a different purpose reminded me of similar issues surrounding an Early Modern Gaelic poem, the so-called ‘Flodden poem’, which I had studied as part of a third year medieval history course. Professor Perczel’s findings are a reminder that while using translations may be inevitable, it is vital not to take these translations at face value.

Over the next two days I had the pleasure of presenting my own work and hearing many interesting and thought-provoking contributions by participating students, only some of which I have space to mention here. I was not alone in highlighting the importance of the press when trying to understanding migration in both the home and the destination country. Brandon Lim (Yale-NUS College, Singapore) showed how newspapers by Armenian emigrants in 19th-century Singapore created a sense of Armenian diaspora; Kseniia Komoza (National Research University Higher School of Economics, Moscow) outlined how the depiction of Russia in the emigrant press in France changed over the course of the Inter-War period.  Ailish Lalor (Leiden University) analysed 19th-century Australian periodicals and newspapers to see how whiteness was constructed through the othering of Jews. Fatima Afzal (Lahore University of Management Sciences) focussed on how the notion of exile is portrayed in Fahmidah Riaz’s poetry, while Mazzy Westwood (University of Southampton) and Isabel Soloaga (University of California, Berkeley) emphasised the importance of art to understand the sometimes traumatic realities of migration – be it the experiences of Jewish artists who fled the Holocaust or of refugees in Rome and Calais in our day.

Monday afternoon we were given a tour of the Vera and Donald Blinken Open Society Archives, which houses an impressive collection of material relating to the Cold War, including educational videos on how to bug a place and postcards of young Hungarians requesting music on an illegal radio station. This visit was made even more valuable by the stories told by Professor Perczel, who had spontaneously joined us on our visit, and the archivist, who had experienced life behind the Iron Curtain themselves. This visit as well as discussions of current political events in Russia was eye-opening in that it showed how conference participants from the West, myself included, lacked information on the history and current politics of Eastern Europe. I felt like although the wall may have fallen, an invisible curtain seems to separate us to this day.

Professor Carsten Wilke (CEU, a specialist on Jewish history in Europe) took us on a walking tour of downtown Budapest to explore the rich and tumultuous history of the 7th District – commonly called the Jewish Quarter. While the Jewish history in Budapest reaches back to about the 12th century, today’s Jewish quarter was established in the 18th century. It was founded just outside of the city walls of Pest as Jews were not allowed to live in the city. The Dohány Street Synagogue, built in the 1850s and still the second largest synagogue in the world, shows that within about a century the quarter grew into a wealthy hub of Jewish life. This changed during the Second World War, when a large number of Jews were deported to camps and the quarter was converted into a Jewish ghetto in June 1944. It is believed that almost half of the Jewish population of Budapest died during the Holocaust. Nowadays, the Jewish quarter houses several synagogues, the Jewish Museum and kosher restaurants and shops. However, parts of it are also being used as ruinpubs, attracting tourists whose main aim is to party and get drunk. I will leave it to the reader to decide whether this is an appropriate use of buildings with such a heavy history.

Ildiko Zakarias’ (CEU) key note lecture on Hungarian migrants working with refugees in Germany the next day brought the conference to a close. The time I spent in Budapest was not only a brilliant opportunity to present my own research, it also reinforced my desire to pursue an academic career path, gave me inspiration for future research and a greater appreciation and understanding of different methodological approaches. On a non-academic level, I gained an insight into how life was behind the iron curtain and formed some hopefully long-lasting inter-university friendships.

I would like to thank the Research Institute of Irish and Scottish Studies for funding this trip and Dr Heidi Mehrkens for all her help in connection with the project.

Olivia Linda Klee graduated with an MA in Scottish Studies from the University of Aberdeen in 2019 and is currently studying for the MSc in Translation Studies at the same institution.