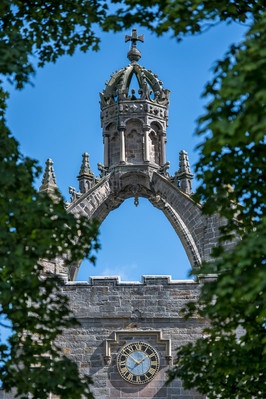 The School of Divinity, History and Philosophy is delighted to announce the appointment of two world-leading professors to join the University of Aberdeen’s outstanding Divinity Department.

Professor John Behr has been appointed as a Professor in Divinity, offering specialisation in Patristics and Orthodox Theology. Professor Behr is Fr Georges Florovsky Distinguished Professor of Patristics and a former dean of St Vladimir’s Seminary, New York, and is widely recognised as one of the world’s leading scholars of early Christianity. A prolific writer, his most recent book is the discipline forming John the Theologian and his Pascal Gospel (OUP), and this book follows a new critical edition and translation of Origen's On First Principles (also for OUP). He is currently working on a new edition and translation of the complete works of St. Irenaeus of Lyons (again to be published by OUP). Professor Behr is excited to receive applications for students wishing to work on Patristics, Orthodox Theology, and the New Testament.

Professor Eric Saak is one of the foremost Reformation scholars of this age, and we are delighted that he is to take up a Chair in Ecclesiastical History. A student of Oberman, his work has considered the role of Augustine and Augustinainism in the Reformation. A former Fulbright Fellow, he is the co-editor of and major contributor to The Oxford Guide to the Historical Reception of Augustine, 3 vols. (OUP), and is working on an ongoing critical edition of the works of Jordan of Quedlinburg (with Brill), the first volume of which has already been published. His most recent book, Luther and the Reformation of the Later Middle Ages (CUP) won the 2018 Gerald Strauss Prize. Professor Saak welcomes applications from students working on Augustine and his reception, the Reformation (especially Luther and Calvin), Medieval Theology, and critical editions of Late Medieval and Reformation texts.