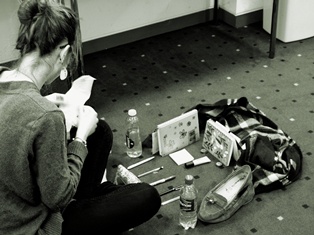 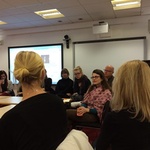 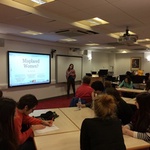 On April 1st, the renowned Serbian feminist performance artist Tanja Ostojic visited the University of Aberdeen and gave a workshop about Misplaced Women?. Over twenty students and staff from disciplines such as Film & Visual Culture, History of Art, Scandinavian Studies and Anthropology at the University of Aberdeen, and sculpture and critical theory at Robert Gordon University participated. Ostojic introduced the Misplaced Women? project, and then gave attendees the opportunity to try it for themselves. Misplaced Women? is a delegated performance, which means that while the artist is the author of the overall concept or idea, others may enact the performance based on those ideas. Ostojic’s original performance for the project involved her unpacking the entire contents of her suitcase in a migrant-sensitive public space – for example, an airport or the a public square. Others who choose to enact the performance can also unpack a suitcase or bag, or perform a similar action, but the idea of the action should be related to the overall concept of Misplaced Women?, which probes the phenomenon of migration by putting the performer in the position of individuals who are often deprived of their own personal or private space.

At the University of Aberdeen workshop, a range of solutions were found, with participants displaying their personal items in unique and original ways – on desks, floors and coatracks. Some who didn’t have a bag with them chose to examine personal and private space from a different angle – one student removed her shoes and laid on the floor, demarcating the area around her as private, as opposed to public space.

The workshop was a great success, and enabled those will little or no experience in performance to try it out in a safe space. The projects will be developed out into the public space of Aberdeen and beyond, so be on the lookout for Misplaced Women on the steps, streets and sidewalks of the city!

You can follow the project on the website: https://misplacedwomen.wordpress.com which already includes one performance that took place in Aberdeen – at the Airport, when Amy Bryzgel picked up the artist upon her arrival. Photos from the workshop and the projects that resulted from it will be soon to follow.