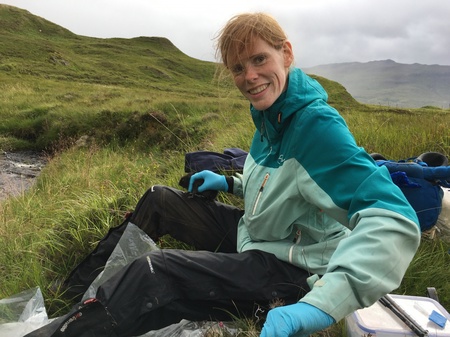 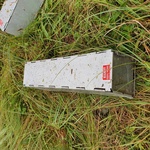 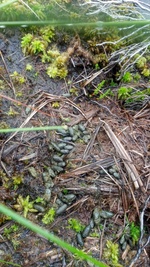 Whenever I tell people that I am a PhD student working on disease ecology and genetics, they picture me in a white lab coat squinting thoughtfully at a PCR I ran earlier. While this is partly true, every year for 6 weeks you will find me somewhere completely different. Here’s that story.

Fieldwork is a big part of my PhD. Every year between July and August, a team of scientists from the University of Aberdeen travel to Assynt, West Coast Scotland, to undertake fieldwork. While the scenery is definitely a perk of the work, the real reason why we head to Assynt is, that it is home to a metapopulation of water voles (Arvicola amphibius), which has been extensively studied for the past 22 years. Thanks to the invasion of American mink and habitat loss Water voles are Britain’s fastest declining mammal. However, Assynt is one of the few places in the UK you can still find them.

Well, I say you can “find” water voles but that is not entirely true. It is unlikely that you will stumble upon a water vole unless you know what you are looking for. So, what do you look for when trying to monitor an elusive animal? For anyone who guessed “Poo” – you are correct.  For two weeks we survey around 110 suitable patches (spread across around 160km) for signs of water vole activity including burrows, clipped grass and – the definitive sign of voles being present – piles of poop, more scientifically known as latrines. Any patches where latrines are found are then classed as occupied, allowing us to assess how the population is doing.

While I would like to say that we spend the rest of the time going to the beach and getting a tan, this is (un)fortunately not the case. Instead, we go and trap any occupied patches.

One of the most frequently asked questions I get asked in interviews is how you catch a vole. And to be honest, there is not a lot to it. We use Aluminium box traps, Elliot traps, which we bait with potato, carrot and grass for nesting. The trap is then placed near latrines and checked within 24 hours. Thankfully voles love their carrot, and during a 4-day trapping session, it is estimated that we catch around 94% of water voles. Any water voles get microchipped, brushed for fleas and ticks, weighed, sexed and are then released. This type of work is vital to water vole conservation, as it allows scientists to estimate the size and health of the population. As the Assynt metapopulation is one of the last surviving in an area without American mink, it is particularly important to monitor it regularly.

While we focus mainly on water voles, we also catch other rodents such as field voles and wood mice. And this is where my PhD comes in. We also take a small blood sample from water and field voles, which are then screened for blood-borne infections. This allows me to understand how infections spread in wildlife communities, how they are affected by different hosts and vectors, as well as dive deeper into the genetics of these infections.

And that is all there is to it. Now you know what I am up to on fieldwork.

If you want to know more about what I do, or you just love the cute animal pictures, follow me on Twitter @LMacKenzie19

Metapopulation: a group of several populations which are connected by movement of individuals

Patch: An area of good habitat. However, just because the habitat is good this does not mean that water voles are present.

Occupied: A patch is classed as occupied when water voles have settled in the area. We use latrines as a definitive sign that water voles are present.

Communities: A group of organisms, from different species, that are present in the same area, and may therefore interact.

Vector: An individual or species, which are vital for spreading infections, often blood feeding arthropods. Think of mosquitoes and malaria.