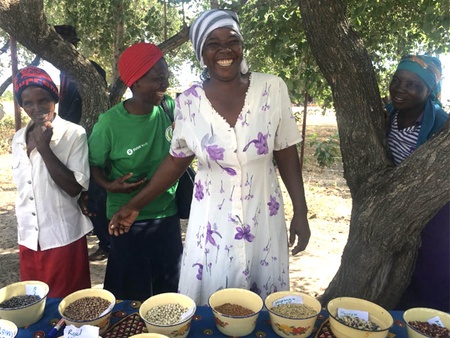 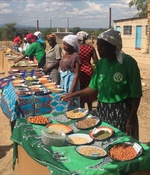 For International Women's Day 2022 Professor Wendy Russell of the Rowett Institute has generously shared a series of incredible images she captured of women farmers while on a research trip to Zimbabwe in 2018.

The images capture smiling faces of brightly clothed women and children as they embrace the challenges of farming life in Sub-Saharan Africa.

Professor Russell, Gut Health theme lead and Professor of Molecular Nutrition at the Rowett Institute, made the trip, which was funded through a pump priming grant, to host a workshop with charitable organisations, academics, government, and business, to promote the use of neglected and underutilised plant species (NUS), such as finger millet and pigeon pea.

Focusing on developing healthy foods as part of a resilient food supply chain Professor Russell’s research interests include protein provision for the future and the exploitation of NUS to improve both nutrition and agrobiodiversity.

Professor Russell explains: “There is overwhelming evidence that the global climate is changing and that smallholder farmers in sub-Saharan Africa are likely to be adversely affected. NUS are recognised as being important in addressing food and nutrition insecurity through adaptation to continuously changing climate conditions. As a result of the workshop, awareness of NUS was raised, and the Zimbabwean government has implemented a strategy for the use of such crops.

“I was astounded by the women I had the opportunity to meet and work with. They face so many challenges in their lives from losing family members to AIDS which is still incredibly prevalent in the area to being attacked by lions, but they just get on with it and are so resilient. They raise children while farming and providing for large families at the same time. All the while they are smiling, singing, welcoming and happy. I was utterly amazed by them and felt it was fitting to share the images of these beautiful people for International Women’s Day.

“The farmers were very knowledgeable about the crops they grow and were particularly interested in the use of NUS. They wanted to learn the benefits of growing NUS from dietary to climate and were very willing to engage.”

Through global challenges funding Professor Russell and her team have developed and commercialised NUS formulation; moringa, to raise the value chain, with a share of the profits going back to support the farmers in sub-Saharan Africa.

Further information about Professor Russell’s work in sub-Saharan Africa can be found here.