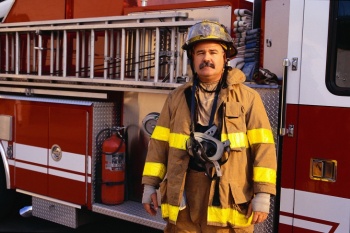 Fire fighters from Grampian Fire and Rescue Service are involved in a research study examining the link between stress and eating behaviour currently being conducted by Nutrition Scientists from the Rowett Institute of Nutrition and Health.

In the hundred years that have passed since its creation, the Rowett Institute has witnessed many changes in society, some of which have impacted on our eating patterns.

For many of us, our day to day working lives can involve a number of stressors or ‘daily hassles’ which may lead to us reaching for less healthy food and snacks, thereby contributing to the obesity epidemic. In order to investigate this, researchers at the Rowett Institute are involved in a study called NeuroFAST which is examining how stress and hassles influence what we eat and drink and whether these influence patterns of snacking.

NeuroFAST is a major EU funded study involving research centres in the U.K., Sweden, Italy, Hungary, Germany, The Netherlands and Spain. Since November 2010, volunteers have been recruited from various workplaces including Aberdeen College, the University of Aberdeen, secondary schools in Aberdeen and Aberdeenshire, Grampian Fire and Rescue Service and the Scottish Ambulance Service. Researchers from the Rowett Institute aim to examine the eating patterns of 450 participants from these various workplaces. This work will involve comparisons between workplaces with government initiatives aimed to make healthier working environments and workplaces without such initiatives. The influence of shift patterns will also be studied.

Fire fighters from the Grampian area are among the participants, and, Kim Giles, a researcher from the Rowett Institute explains why this group are so interesting to study.

"By the very nature of their work, fire fighters encounter different stressors than other workers and are also required to work a changing shift pattern including day and night shifts. Because of their varied working hours and the unpredictable nature of the job, the eating habits of fire fighters can be more erratic and this makes them an interesting group of subjects for our study."

Each individual is visited in their workplace to have various body composition measurements taken including abdominal fat and visceral fat percentage: excess visceral fat having been linked to conditions such as cardiovascular diseases and diabetes. During the week long study, volunteers complete a weighed intake food diary and answer questions every waking hour on hunger, motivation to eat and stress levels. A physical activity monitor is worn by volunteers for seven days and various questionnaires are completed on personality, job, mood and eating behaviour.

After the seven days, the researchers again meet each volunteer at their workplace to collect the food diaries and equipment and have further questionnaires completed. Following data collation, participants are sent a comprehensive feedback report which includes their body measurements, eating behaviour and nutritional information and physical activity data. Volunteers from this first phase of the study are now being invited to an additional phase for which the researchers will soon be seeking participants from the general public.

Ultimately the research team aim to develop and test a web based intervention tool for stress management in the workplace and devise strategies that promote healthier working environments.