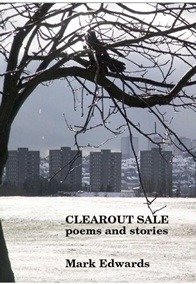 Clearout Sale by Mark Edwards has recently been published by Andromache Books..

Publishers note: "Mark Edwards writes with wit, poignancy and economy. In poems and short stories of remarkable grace he delineates the corners of a world - his cast of genial no-hopers and poetic dreamers speak to us in the lanugage of Aberdeen - lilting, ironic, occasionally obscene, often hilarious and always genuine, There is depth of feeling in their reticence and a hard- edged wisdom in their careful tenderness. In rendering the specific with such attention, Edwards acheives a universal truth, and shows us ourselves, often at our most vulnerable."

By the author: "Somebody asked me why I called this book Clearout Sale.  I decided on this as a title long before the media began it’s running commentary on our current economic downturn.  I would like to say I predicted the whole thing but if I did have psychic powers I’d be in the betting shop far more and wouldn’t get as much writing done.  Basically I wanted to avoid the convention of naming the book after a particular poem or story contained within it.  What I thought might be better was if I could find some phrase in the book that carried a bit of resonance.  The phrase ‘clearout sale’ is used by a character in one of the stories.  It also sums up my feeling while compiling the book that I was getting rid of a lot of work that had been sitting inside the computer for a long long time.  Some has appeared in magazines.  Much of it was written during creative writing courses I took as part of an MLitt I did through the Research Institute of Irish and Scottish Studies.  The earliest drafts of some of the poems and stories were written while I was an undergrad, studying literature and being fortunate enough to have Alan Spence look over my work.

I’m hardly the first person to have studied at Aberdeen and then gone on to publish fiction.  I can think of at least five established writers off the top of my head.  My biggest hope is that for any young students writing at the moment, and wanting to see their work in print, the publication of this book might provide some encouragement.  Some reassurance it can actually happen.  Of course, it takes a great deal of perseverance, a huge amount of time and effort.  But if you’re a writer you already know this."

The title can be purchased from www.andromachebooks.co.uk