Aberdeen recognised for its contribution to pharmacological research
24 December 2014 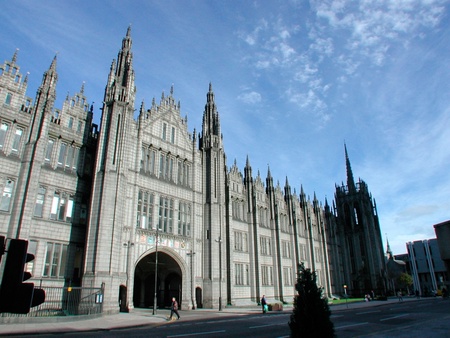 A new initiative to put advances in UK pharmacology 'on the map' has recognised the contribution to research in this field made in Aberdeen.

The British Pharmacological Society identified sites of special scientific interest linked to achievements in pharmacology based on a ballot of MPs, peers and senior members of the scientific community.

Work conducted at the University of Aberdeen at its previous base in Marischal College was one of the winning sites revealed at a special parliamentary reception.

It was recognised for the work of Professor Hans Kosterlitz and John Hughes who isolated the first brain endorphins and demonstrated their release from nerve endings in the brain, revealing how the body deals with pain, analgesia and addiction.

It also acknowledged work conducted at Marischal by Professor Roger Pertwee and his team. Professor Pertwee is a world-leader in cannabinoid research, and paved the way for pioneering work in cannabinoid-based medicines. This research continues today at the University’s Foresterhill Health Campus.

The University received a trophy to mark its achievements at Marischal College from the British Pharmacological Society.

Professor Humphrey Rang, President of the British Pharmacological Society said: “These sites of special pharmacological interest have made outstanding contributions to the discovery and development of medicines, and undeniably also to the health and economy of the UK. By learning from our rich history, we can ensure that the UK remains at the cutting edge of research.”

Heather Wallace, Professor of Biochemical Pharmacology and Toxicology at the University of Aberdeen, added: “The University of Aberdeen has been at the forefront of research and innovation throughout its 500 year history. Pharmacology has been part of that history for over 50 years and the University can claim the rare distinction of two British Pharmacological Society Wellcome Gold Medal winners. This award winning pharmacological research on opioids and cannabinoids was carried out at Marischal College by Professors Kosterlitz and Pertwee and their teams. We are delighted the importance of that early, and indeed continuing, work has been recognised in this way. Our pharmacology research continues with vigour at the Institute of Medical Sciences on our Foresterhill health campus.”