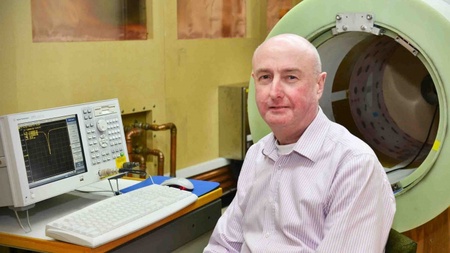 The development of next-generation MRI scanners designed to identify key diseases earlier and in more detail has taken a step forward with the award of a 6.6M Euro research grant.

Fittingly the research, funded by a European Union Horizon 2020 research grant, is being led by experts at the University of Aberdeen, where the first clinical MRI (Magnetic Resonance Imaging) machine was built and used to scan a man 35 years ago.

The new method, thought to be the first of its type in the world, will reveal far more detailed information about diseases including osteoarthritis, cancer and dementia.

Current MRI machines work on just one magnetic field, but Fast Field Cycling (FFC) MRI scanners will allow patients to be passed through thousands of possible variations in field whilst they are inside the MRI machine, producing more information about the inside of their body in the process.

“Current MRI scanners put the patient in a strong magnetic field to measure something called the T1 relaxation time, explains Professor David Lurie, a Biomedical Imaging expert at the University of Aberdeen, and project leader. “Different tissues have different T1 relaxation times, so by measuring this difference, we can build up images of different tissues in the body and therefore identify where disease is occurring. This works very well, but because each current hospital MRI scanner operates at only one magnetic field strength, they miss the extra diagnostic information contained in the variation of the T1 value with the strength of the magnetic field.

“Over the last 10 years we’ve been building very special scanners that can be set to thousands of values of magnetic field strengths while the patient is in the scanner, and that’s what is completely novel about them. These FFC-MRI scanners allow us to draw a graph of the T1 relaxation time as a function of the strength of the magnetic field. That gives us a fingerprint, the shape of which changes from disease to disease.

These new scanners will give us extra information which can help with identification and treatment. " Professor David Lurie

“In basic terms, these new scanners will give us extra information which can help with identification and treatment. For example in Deep Vein Thrombosis (DVT) where a blood clot occurs in a deep vein - having the clot is not hazardous in itself but if part breaks off and travels to the brain or heart it can cause a stroke or a heart attack. It’s easy to find out where the clot is but it’s not currently possible to determine how stable it is. We believe FFC-MRI, through these measurements of T1 vs Field Strength and the signatures that the graph provides of the tissues, should give us a handle on the stability or age of a blood clot, so allowing doctors to optimise treatment.

“In fact there is a whole range of diseases where FFC-MRI could benefit diagnosis and monitor the success of treatment – early tests show it can measure changes in cartilage in osteoarthritis and our research has also shown that there are changes visible in cancer. We believe there may be changes in many other conditions too, such as changes in the brain that are associated with dementia.

“The signals measured by FFC-MRI are a function of what’s happening on a molecular level in tissues which is where disease begins but we’re not absolutely certain what is happening, and what’s causing these changes – that is what this new project will aim to explore, as well as developing techniques to improve the scanners and to provide better quality images of the body.”

The University of Aberdeen will oversee the four-year project funded by the European Commission, which involves nine teams spanning six countries. The Aberdeen-led consortium of groups from universities, research organisations and industrial partners fought off stiff competition for the funds from across Europe, with the project – called “IDentIFY” – successfully making it through a rigorous two-stage evaluation and grading process.

Professor Lurie adds: “The teams will explore a wide range of topics, from theoretical groups looking at what is happening at a molecular level in an attempt to find some reliable biomarker detectable indicators of disease state or progression - which might eventually help pharmaceutical companies to develop new drugs for neurodegenerative diseases such as Parkinson’s and Alzheimer’s, as well as other diseases like cancer and osteoarthritis. We’ll also be trying to find ways of measuring magnetic fields more accurately and correcting for magnetic fields in the environment of the scanner, so that we can extend the range of FFC-MRI scanners to explore what happens at extremely low magnetic fields, which we believe will make scanners even more sensitive to disease.”

Professor Lurie’s team’s research has been supported over the last 10 years by several millions of pounds of funding from the EPSRC (Engineering and Physical Sciences Research Council).

The findings from the new project will be brought together in four years’ time and will be passed on to the medical imaging industry that can take forward the development and eventual manufacture of the scanners.