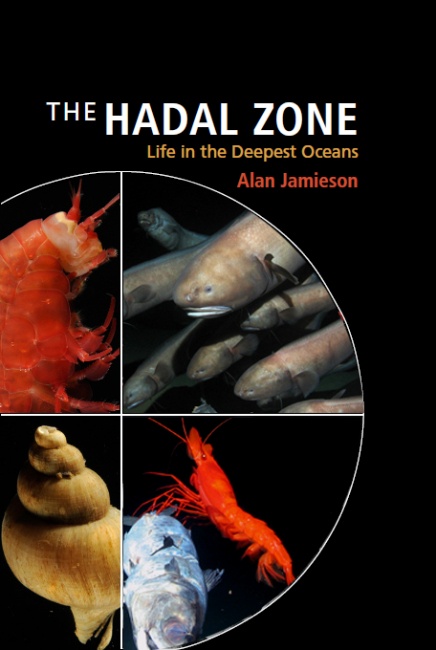 A book written by a University of Aberdeen deep sea explorer, and endorsed by Holywood film director and fellow explorer James Cameron has been nominated for a major award.

The Hadal Zone: Life in the Deepest Oceans, by Dr Alan Jamieson, has been nominated by the Royal Society of Biology in its Postgraduate Textbook Prize category.

Described by Cameron, director of Terminator 2 and Titanic, as “the most comprehensive book yet written on the mysteries of the ocean's deepest places, written by one of its best explorers”, the book gives an in-depth account of ‘one of the last great frontiers in marine science.’

In nominating, judges for the award said the book was “an outstanding influential review of a unique under-explored ecosystem.”

The hadal zone, which is composed primarily of ocean trenches, represents the deepest marine habitat on Earth (6,000-11,000m). All the trenches together occupy an area about the size of Australia. It accounts for 45% of the total ocean depth range. Despite very little research since the 1950s, technological advances over the last 10 years have seen a renaissance in hadal exploration.

Providing an overview of the geology involved in trench formation, the hydrography and food supply, Dr Jamieson’s book details all that is currently known about organisms at hadal depths and linkages to the better known abyssal and bathyal depths. New insights on how, where and what really survives and thrives in the deepest biozone are provided, allowing this region to be considered when dealing with sustainability and conservation issues in the marine environment.

A review in Nature, by Daniel Cressey, describes the book as “so densely packed with facts on this extraordinary environment that it rewards casual dipping in and out”. He adds that the book has “shown us just how much we have yet to discover about the hadal zone. Here's hoping for enough new findings to justify a second edition soon.”

Click here for details for the nominations or visit www.rsb.org.uk