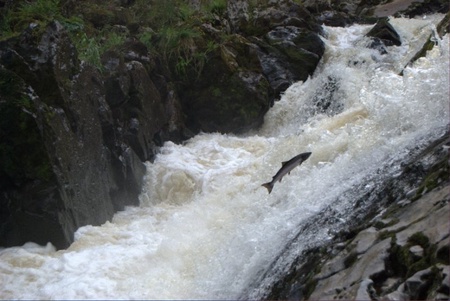 As we prepare to adjust to the shifting day length caused by the change in clocks, a team of scientists has discovered how changes in the light are used in the completion of one of nature's most amazing migratory journeys.

Researchers from the Universities of Aberdeen and Tromsø (Norway) have taken a leap forward in understanding how wild salmon know when to begin to travel from the streams and rivers in which they are spawned to the sea – a journey which can take them hundreds of miles through treacherous waters filled with predators.

Their study, funded by the Biotechnology and Biological Sciences Research Council (BBSRC), has shown for the first time that a unique set of genes control this mysterious migratory behaviour, which is followed by spectacular homecoming to the same stream where they were born

Professor Sam Martin, from the University of Aberdeen, said: “We know that the change in day length during spring is important for the Atlantic salmon to know when is the right time to start making the journey.

“We have been able to demonstrate for the first that genes controlling thyroid hormones play a role in the previously mysterious migratory behaviour of wild salmon.

“The timing of this migration has to be very precise as the young salmon needs to enter the saltwater when they are fully adapted to the marine environment but there is only a short time window when they can survive in both fresh and salt water.

“To avoid predators and to coincide with rich feeding off the coast, all the salmon from a river try to enter the sea together.

“Understanding how they are able to do this is one of the great mysteries of the natural world but by combining our expertise in seasonal biology and fish physiology we have been able to shed new light on the phenomenon.”

We have been able to demonstrate for the first that genes controlling thyroid hormones play a role in the previously mysterious migratory behaviour of wild salmon." Professor Sam Martin

Their findings, published in the journal Current Biology show that two sets of genes, one on the gill and the other in the brain, work together to provide a cue for the young salmon, known as smolts, to initiate their incredible journey.

Professor Martin added: “What we have discovered is that there are two forms of genes responsible for activating thyroid hormone. The first form acts in the brain and responds to the change in the day length, which we think causes behavioural changes in the young salmon to initiate their migration.

“The second form of the gene is changed in the gill as soon as the fish enter the salt water. The gills in salmon are vital for controlling the salt balance in the fish as well as oxygen uptake.”

Professor David Hazlerigg, from the University of Tromsø said the findings had the potential to increase our understanding of other similar migratory journeys.

“What these findings present us with is an extremely interesting new insight into the evolutionary process,” he added.

“The migratory life style, in which juvenile fish migrate from their natal streams to go to sea, feed grow and return years later as adults, is one of the mysteries of nature but there are many others.

“Greater understanding of this phenomenon could also lead the way for further learning into the migration changes that other animals make.”