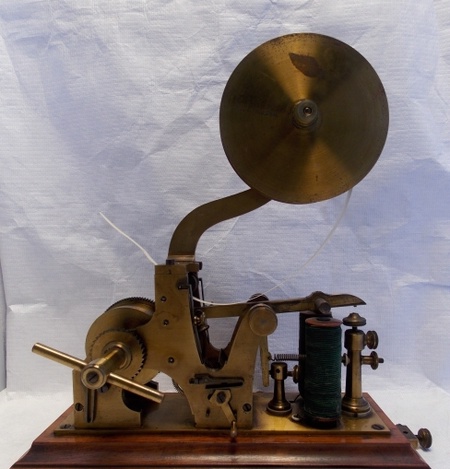 The collection, which includes instruments used for teaching and research since the 18th century, is recognised as of ‘national significance’. A Scottish Government Recognition grant has funded a 15-month project focused on improving the documentation and storage of more than 3,000 historical scientific instruments.

The project has now reached its conclusion and the team have sifted through dozens of boxes of previously uncatalogued material, as well as enhancing the quality of existing records.

They have discovered many items including a 1900s Edison standard phonograph for recording and playing wax records, a mid-19th century automated telegraph receiver and two globes dating back to 1785 and 1807.

Shona Elliott, Curator for Documentation and Fine Art at the University of Aberdeen said: “The University’s collection of scientific instruments is excellent, both in respect of the range of subjects covered and its continuity over a period of great change.

“However we identified the need to enhance pre-existing records and identify, sort and improve access to many more items.

Among the significant items uncovered were the Edison phonograph, a late-19th century typewriter and a battery of horseshoe magnets which may have been given by Benjamin Franklin" Shona Elliott

“Now significant material worthy of long-term care has been documented and properly stored in museum-grade storage, while other material is being identified as more appropriate for demonstration use, handling by the public or for transfer elsewhere.

“Among the significant items uncovered were the Edison phonograph, a late-19th century typewriter and a battery of horseshoe magnets which may have been given by Benjamin Franklin.”

The museums team engaged experts in Aberdeen and elsewhere to share their knowledge in order to inventory, catalogue and review the collection, and this collaboration will culminate in a seminar on June 23 and 24.

Shona added: “This project has been really beneficial and one of the main advantages has been the relationships formed through increased collaboration between museums and academics.

“Our closing seminar will allow other museums and experts to share knowledge and experiences in relation to working with historic science collections."