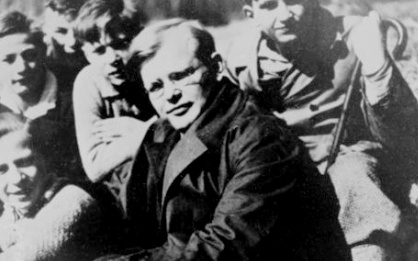 A series of lectures and research workshops dedicated to a German theologian whose opposition to the Nazis cost him his life will get under way at the University of Aberdeen on Friday.

Dietrich Bonhoeffer (1906-1945) was a theologian, a pastor, a spiritual writer, as well as an accomplished musician and author of fiction and poetry.

His life, work and on-going influence will be explored in a year-long series of events organised by the Department of Divinity and Religious Studies at the University of Aberdeen and funded by a grant from the Royal Society of Edinburgh.

Bonhoeffer was a staunch opponent of Hitler and leader in the Confessing Church movement opposed the Nazification of Protestant Christianity. His books Discipleship and Life Together, published in the late 1930s have been hailed by many as modern spiritual classics; his late writings on theological ethics and Christianity's role in the secular world have become widely influential as well.

Bonhoeffer’s political resistance and involvement in plans to remove Hitler from power led to his arrest by the Gestapo in 1943. Incarcerated in Tegel Prison in Berlin, he was latterly moved to Flossenbürg Concentration Camp where he was executed in April 1945, just days before the German surrender.

The inaugural lecture in the series ‘The Challenge of Bonhoeffer’s Theology for Contemporary Ethics and Public Life’ will be delivered by Dr Jennifer McBride, Chair of Ethics, at Wartburg College at 4.30pm on Friday March 28. She will consider ‘Who is Dietrich Bonhoeffer for us today?’

This series of lectures and exploratory workshops will bring his work to new audiences and help to forge long-term research partnerships with many of the leading Bonhoeffer researchers of the current generation in the UK, Europe and beyond" Dr Philip Ziegler

The series will then continue with a further public lecture and two workshops in December and January.

Dr Philip Ziegler, Senior Lecturer in Systematic Theology said: “Dietrich Bonhoeffer is one of the most widely recognised and contested modern theologians. His own dramatic involvement in the German resistance to Hitler, and consequent execution, have undoubtedly contributed to widespread and sustained interest in him and his work.

“Today, Bonhoeffer’s writings continue to find an ever-expanding readership around the globe and many significant debates in contemporary theology and Christian ethics have been shaped under the influence of the varied interpretations and creative reception of his provocative theological legacy.

“This series of lectures and exploratory workshops will bring his work to new audiences and help to forge long-term research partnerships with many of the leading Bonhoeffer researchers of the current generation in the UK, Europe and beyond.”

Friday’s lecture will take place at 4.30pm in room KCF22, King’s College. Entry is free and booking is not required.