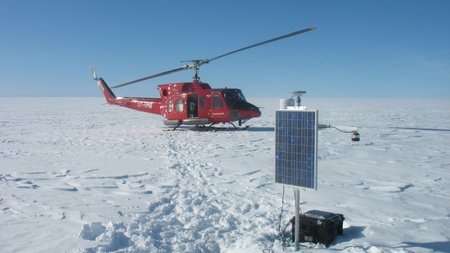 New insight into how glacier movement is affected by melting ice in summer could help predictions of sea level rise.

Studies of the Greenland ice sheet, including during a record warm summer, are helping a team of scientists better understand how summer conditions affect its flow.

The work - which included input from Dr Douglas Mair from the University of Aberdeen's Department of Geography and Environment - is important for predicting the future contribution made by melting glaciers to sea level rise.

Ice flows slowly from the centre of the Greenland Ice Sheet towards its margins, where it eventually melts or calves into the ocean as icebergs.

Knowing how fast this movement occurs is essential for predicting the contribution of the ice sheet to sea level rise.

In summer, ice from the surface of a glacier melts and drains to the bed of the ice sheet, initially raising water pressure at the base and enabling the glacier to slide more quickly.

It can, at times, move more than twice as fast in summer compared with winter, they found.

In 2012, an exceptionally warm summer caused the Greenland Ice Sheet to undergo unprecedented rates of melting.

However, researchers have found that fast summer ice flow caused by significant melting is cancelled out by slower motion the following winter.

Scientists found that this is because large drainage channels, formed beneath the ice by the meltwater, helped to lower the water pressure, ultimately reducing the sliding speed.

The discovery suggests that movement in the parts of the ice sheet that terminate on land are insensitive to surface melt rates.

It improves scientists’ understanding of how the ice sheet behaves and curbs error in estimating its contribution to sea level rise in a warming world.

They compared ice motion from an average melt year, 2009, with the exceptionally warm year of 2012.

The study, carried out in collaboration with the Universities of Sheffield, Aberdeen, Tasmania and Newcastle, was published in Proceedings of the National Academy of Science and supported by the Natural Environment Research Council.