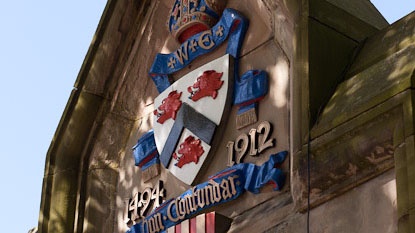 A new Doctoral Training Partnership (DTP) to support postgraduate studentships and training in the arts and humanities in Scotland has secured funding of £14.2 million.

The University of Aberdeen is part of a consortium of Scottish Universities which has been awarded the funding by the Arts & Humanities Research Council (AHRC). The consortium, which is led by the University of Glasgow, also comprises Dundee, Edinburgh, Glasgow School of Art, St Andrews, Stirling and Strathclyde universities.

This success has been reinforced by the commitment of up to £1.8 million from the Scottish Funding Council to support the establishment of a Scottish Graduate School for Arts & Humanities (SGSAH).

The culmination of more than two years of cooperative working between the partners, the DTP will offer doctoral studentships and training across the full range of the AHRC’s disciplines – with 200 funded studentships over the next five years.

The scheme will be managed by the newly-created SGSAH, which will be administered from the University of Glasgow, but with shared governance across all partner institutions.

Professor Murray Pittock, Vice Principal and Head of the College of Arts at the University of Glasgow, said: “The establishment of the SGSAH represents a departure from existing models of postgraduate research education.

“It is a potentially transformative step in changing the landscape of Arts & Humanities doctoral provision in Scotland, and allows strategic decisions affecting Scottish postgraduate education to be made in Scotland.”

The status of the SGSAH as a national organisation, involving a range of Scottish Higher Education Institutions, will provide the framework for the development of more coherent, strategic and sustainable partnerships with organisations from across the creative, cultural and heritage sectors.

There are more than 30 organisations supporting this work, ranging from the National Galleries Scotland, to the Royal Society of Edinburgh, to Glasgow Chamber of Commerce, to Dundee Repertory Theatre.

Professor Pittock added: “The SGSAH will develop doctoral researchers across Scotland who not only recognise the value of arts & humanities research but who have the skills, experience, aspiration and confidence to apply that research in addressing issues of economic, social and cultural importance.”

Professor Margaret Ross, Vice Principal and Head of the College of Arts and Social Sciences at the University of Aberdeen, said: “I'm delighted that the significant collaboration of colleagues across universities, working with partners in the private and public sectors, led in our case by Professor Cairns Craig, Glucksman Chair of Irish and Scottish Studies and Head of the School of Language and Literature at the University of Aberdeen, has brought this success in securing support from the Research Council and the Scottish Funding Council for postgraduate studies in the Arts and Humanities.

“We look forward to working with our partners to bring students to work with our outstanding scholars at Aberdeen.”

The Doctoral Training Partnership will be open for applications from early 2014 for PhD entry to the consortium’s institutions in October 2014.

The University of Aberdeen is also one of 12 institutions involved in administering a new UK-wide Centre for Doctoral Training in Celtic Languages.

The AHRC has awarded the consortium £1.85 million over five years to support doctoral students across the range of the Celtic Languages, whose innovative training programme will be supported by its core partners Bòrd na Gàidhlig, BBC Northern Ireland, and the National Library of Wales.

The Centre for Doctoral Training will offer training, skills and capacity building in specific disciplinary areas which are AHRC current priorities and enable a strategic vision of postgraduate education in Celtic languages to develop across all the countries of the UK.

Professor Rick Rylance, Chief Executive of the AHRC, said: “This is an important step forward in delivering the best possible training and support for postgraduate students in the arts and humanities, and in developing a collaborative approach which pools expertise and expands horizons for postgraduate researchers.

“We are delighted at how the sector and partners beyond the sector have responded, and we look forward to working closely with them to support the next generation.”