Revealed: Unique Orkney Vole most likely came from Belgium over 5,000 years ago
03 September 2013 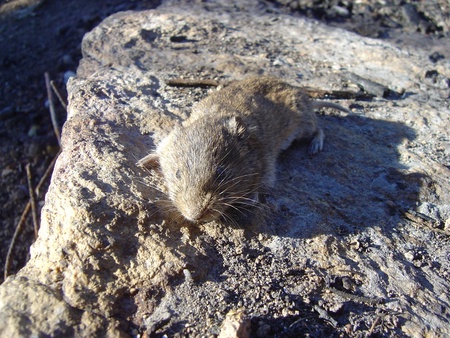 The Orkney Vole is unique to its remote island home, but the question of how and when it first arrived on those shores has long remained a mystery to the scientific community - until now.

An international team of scientists led by the University of Aberdeen and Cornell University in the US has discovered that European common voles were likely brought to Orkney by farmers from the coast of Belgium as early as 5,100 years ago.

Professor Keith Dobney, one of the co-directors of the research, said: “The Orkney Vole - a subspecies of the European common vole – is found nowhere else in mainland or island UK. Yet the extensive archaeological record from Orkney has produced thousands of their bones and teeth, suggesting that they most likely arrived with early farmers or through Neolithic maritime trade and exchange networks.  Where in Europe they came from and exactly when they were introduced has been a mystery for decades, but new genetic techniques and direct dating of their bones have finally allowed us to answer these questions.”

In one of the largest studies of its kind (the results of which are published in Molecular Ecology today, September 3) the international team of scientists used a combination of modern and ancient DNA and novel morphological techniques to answer the longstanding question regarding the likely European origins of the Orkney vole and, by association, the world famous Neolithic culture of Orkney.

Dr Natália Martínková, who carried out the genetic studies on living common voles from continental Europe and Orkney, said: “Although our modern DNA results did not reveal exact genetic matches with any populations we sampled across continental Europe, the closest were from populations living today on the coast of Belgium, the likely origin for the original Orkney populations.”

By taking voles to Orkney, Neolithic settlers unwittingly became early conservationists, since whilst the genetic signature of the common vole in mainland Europe has changed dramatically, its isolated Orcadian cousin remains as an isolated remnant of how voles would have been more than five millennia ago.

“The research provided us with a totally unexpected result. The genetic variation in all western continental European common voles was shown to be much less diverse than those modern populations on the Orkney Islands - completely the reverse of what would be expected for a normal/traditional model of island colonisation and evolutionary history,” said Professor Jeremy Searle, co-director of the research from Cornell University. “This most likely suggests that what we have on Orkney is a snapshot of the original genetic diversity of common voles that existed in continental Europe back in prehistory – a diversity that has subsequently been lost from the European mainland but not from Orkney.”

Analyses of ancient DNA from numerous archaeological remains of Orkney voles (carried out by Dr Ross Barnett) supported the likely coastal Belgian origin of the ancient voles, and confirmed the same genetic diversity seen in modern Orkney voles was present in the earliest dated archaeological vole specimens from the islands  - some 5100 years old. Finally, the two dimensional shape analyses of the first molar (undertaken by Dr Thomas Cucchi) revealed a pattern of distinctive shape change on the different Orkney islands from earliest introduction to the present.

This new research confirms that common voles were introduced to the Orkney Islands soon after the arrival by sea of early Neolithic farmers some 5100 years ago and were most likely picked up on the Belgian coast and transported directly to Orkney. Why common voles were not introduced to the mainland UK, or any of the other UK offshore islands apart from Orkney, remains a mystery, as does whether they were deliberately or accidentally introduced by humans. But the team’s data suggest that prehistoric seafarers directly linked the famous Neolithic culture of Orkney with their counterparts in coastal continental Europe.

The much greater genetic diversity of modern and ancient Orkney voles suggests that either large numbers were introduced at once or that continuous introduction from different continental European populations occurred.  It also reveals that the Orkney vole is perhaps more unique than previously thought, with modern populations appearing to still retain a number of the same genetic lineages that were present in continental Europe at the end of the last Ice Age. This diversity that has been lost on the mainland over the last 5000 years - through boom and bust cycles brought about by human impact on their preferred habitat - makes the Orkney vole a “Genetic Ark”, retaining genetic material that would otherwise have vanished.