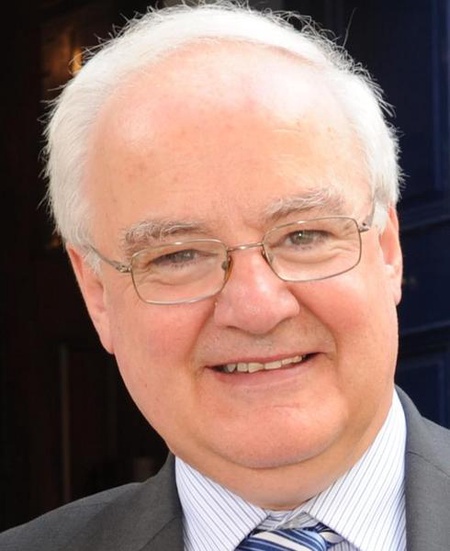 A retired medical physicist who has worked at the University of Aberdeen for more than four decades has been recognised for his outstanding contributions to medical science in Scotland.

Peter Sharp, Emeritus Professor of Medical Physics at the University, has been awarded the Lady Margaret MacLellan Prize awarded biennially by Tenovus Scotland - a charity supporting medical research in Scotland.

The Prize was created in 1985 when Sir Robin MacLellan set aside a sum of money for Tenovus Scotland to provide a monetary prize and medal for outstanding contributions to medical science in Scotland in a designated subject.

This year’s Award was to go to the individual, or group of individuals, actively engaged in medical research in Scotland who have contributed most in the field of imaging research in recent years.

Professor Sharp, who is still researching and writing papers at the University, joined the institution in 1969 as a PhD student under the supervision of Professor John Mallard, whose team was first in the world to scan the body of a patient using Magnetic Resonance Imaging.

Since those pioneering days, theUniversity of Aberdeen has continued to lead the way with imaging.

Professor Sharp took over from Professor John Mallard as Chair of Medical Physics in 1992 and went on to set up the John Mallard Scottish Positron Emission Tomography (PET) Centre at Aberdeen Royal Infirmary. The PET technique produces images showing the chemistry of the body.

Professor Sharp chaired a working group that led to the technique being introduced acrossScotland, with the Scottish Government funding PET imagers in the major cancer centres. Today PET has a major impact on how cancer is managed.

Working with Dr John Olson and Professor John Forrester, Professor Sharp’s team developed software that is now used routinely across Scotland by the Scottish Diabetic Retinal Screening Service to look for the early signs of eye disease in people with diabetes - the most common cause of blindness in the ‘working age’ population.

The software has made it feasible to image every person with diabetes annually - saving the NHS hundreds of thousands of pounds each year.

Professor Sharp is President of the European Federation of Organisations for Medical Physics, which represents all medical physics societies inEurope. He is a Fellow of the Royal Society of Edinburgh and was also awarded the OBE in the Queen’s Birthday Honours List in 2012 for his services to healthcare science.

Professor Sharp said of this latest accolade from Tenovus Scotland: “Much of my research has been team work and the award is also an acknowledgement of those successful collaborations over the years.

“The University of Aberdeen has a great track record of pioneering techniques that have gone on to be adopted in healthcare acrossScotlandand beyond and it is tremendous that it has been recognised by TENOVUS in this way.”

Professor Alison Murray, Roland Sutton Chair of Radiology at the University of Aberdeen, added: “The University is delighted and very proud that Professor Sharp’s research has been honoured by Tenovus Scotland with this prestigious Prize.

“Professor Sharp was part, and latterly leader, of a highly innovative Department of Biomedical Physics, which has provided key developments in medical imaging, including Magnetic Resonance Imaging now used routinely throughout the world. His department also received the Queen's Anniversary Prize 2000 in recognition of its ‘pre-eminence in medical imaging technology for over 30 years.”

Dr David Galloway, Chair of Tenovus Scotland Grampian, added: “Professor Sharp has contributed to the many accolades of the Department of Biomedical Physics and NHS Grampian.  He is the fourteenth recipient of this prestigious award and only the second from the NE of Scotland in the 26 years of the prize.”

Professor Sharp received his award yesterday  (June 24) at the Annual General Meeting of Tenovus Scotland that took place at the Royal College of Physicians and Surgeons of Glasgow.

Professor Sharp will receive his award on Monday (June 24) at the annual general meeting of Tenovus Scotland taking place at the Royal College of Physicians and Surgeons of Glasgow.