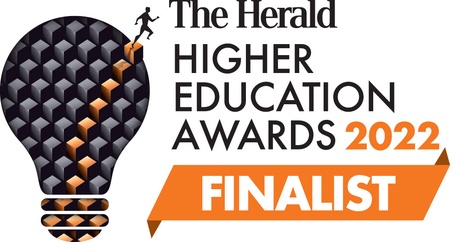 Research led by the University of Aberdeen has been honoured with a top accolade at this year's Herald Higher Education Awards 2022, held last night (Tuesday, 31 May) in Glasgow.

The Cool Farm Tool (CFT), which aims to tackle greenhouse gas emissions in food production, received the award for Research Project of the Year, which was sponsored by the Scottish Funding Council.

Developed by leading climate scientist Professor Pete Smith, from the University’s School of Biological Sciences, the CFT is an online calculator for farmers to calculate the farm gate carbon footprint and environmental impact of farm produce to inform farming and field-level management decisions, based on robust quantification methods.

Now widely available as a free-to-use app by farmers and companies on a global scale, the CFT is a partnership involving the University’s internationally recognised Soil Science Centre of Excellence, led by Professor Smith, Unilever and the Sustainable Food Lab.

The University had three nominations including the CFT shortlisted in the Awards, which are held to celebrate the activities of staff and students in Scotland’s colleges and universities.

Among the other nominees were David Mercieca and Astrid Lucia Offersen, who were in the running for the Outstanding Contribution from a University Student Award.

David, a third year BSc Neuroscience with Psychology student, has served as the medical sciences convener, vice-chair for student council and vice-chair for the Students’ Association education committee, and the Institutional Student Lead for the Scottish Enhancement Theme.

The Cool Farm Tool is a superb example of University research making a real-world difference and it's good to see recognition for it and Professor Pete Smith, who is internationally renowned for his work" Professor Karl Leydecker, Senior Vice-Principal

Astrid, a fourth year Anthropology and International Relations student, has shown her commitment to improving students’ lives at the University, with special emphasis on those with protected characteristics. As a member of the BAME Students’ Forum Astrid has played an essential role in organising academic, philanthropic and leisure activities to engage students and the wider community, is heavily involved in the organisation of Freshers’ and Refreshers’ Fayres and has also been a part of the Student Council participating in many of its meetings and debates.

Meanwhile, the University’s campaign around COP26 saw it shortlisted for the Marketing / PR Campaign of the Year Award. Involving a number of teams, the University’s activities throughout COP26 attracted 800 people to University events, boosted organic reach of its Facebook posts to over 500,000 users and doubled normal engagement rate on Twitter. Overall, the University or its work was discussed in 13.5 million public conversations online.

“The Cool Farm Tool is a superb example of University research making a real-world difference and it’s good to see recognition for it and Professor Pete Smith, who is internationally renowned for his work.  Acknowledgement for the achievements of our students and our work around COP26 is also very welcome.”

Donald Martin, Editor-in-chief, The Herald and The Herald on Sunday, added: “The depth and breadth of initiatives being carried out in our higher educational institutions is quite exceptional and it was only right that we had the chance to honour the organisations, staff and students who are at the forefront of so many exciting projects.”