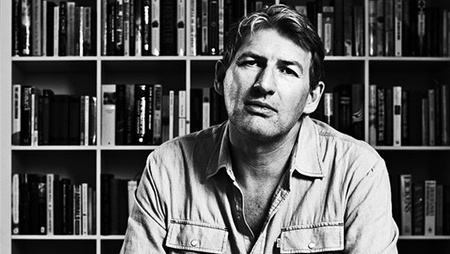 The University has a dynamic and successful Creative Writing programme, with writers like Wayne Price, Helen Lynch, David Wheatley and others, so I will be joining an experienced and skilled cohort" Alan Warner

The acclaimed author of eight novels, Alan will discuss the burning theme of the Art of Film Adaptation in conversation with Professor Alan Marcus at the University’s Regent Lecture Theatre on Tuesday, November 5 at 5.30pm.
Together with Irvine Welsh and A. L. Kennedy, he is seen by many critics as one of the most exciting voices in contemporary Scottish literature.
The film of Alan’s debut novel, Morvern Callar, was directed by Lynne Ramsay and won numerous awards, including at the Cannes Film Festival. His third novel, The Sopranos, became a successful West End play, and the film adaptation, Our Ladies, has just premiered at the London Film Festival to glowing reviews.
Alan said he was ‘very excited’ to be joining the University’s Creative Writing team.
“The University has a dynamic and successful Creative Writing programme, with writers like Wayne Price, Helen Lynch, David Wheatley and others, so I will be joining an experienced and skilled cohort.
“I have been, ‘out in the field’ as a full time writer for many years, with certain experiences in the creative industries which bring a specific edge - an understanding of the real environment creative writers have to operate in.
“At the end of the day though, it is about the skilful application of the writing on the page; of encouraging and assisting writers to express themselves and their visions. It’s energising to work with new writers and I look forward to doing that and furthering all literature activities which the University of Aberdeen is so active in.”
Professor Marcus, Chair in Film and Visual Culture at the University, said: “Alan Warner is one of Scotland’s foremost novelists, and several of his works have been made into outstanding films and a popular musical.
“In addition to appearing in this special Guy Fawkes Night Director’s Cut event, we are delighted to have him now joining the staff of our University. I know how excited students will be to take his screenwriting courses.”
The Director’s Cut event is hosted by the George Washington Wilson Centre as part of its View series, with support from Aberdeen City Council's Creative Funding programme and the University of Aberdeen's Development Trust.
To register a place at this free event, which will be followed by a reception, click here.