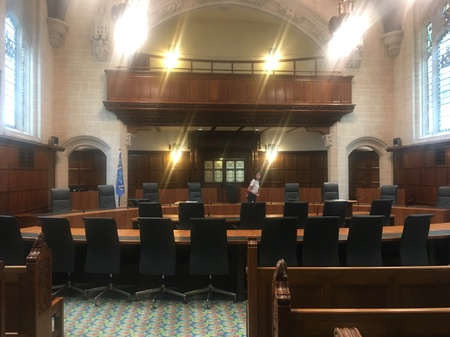 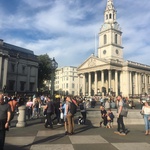 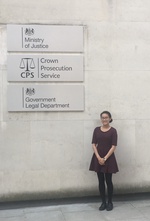 This summer I was very lucky to be offered a summer internship in the Customer Insight and User Research team of HMCTS (Her Majesty’s Courts and Tribunal Service). Although I was initially surprised to be offered the role with almost no experience of how our justice system works, the research skills that I had gained through studying psychology at the University of Aberdeen proved invaluable in securing a Government Social Research role. Many of my colleagues had backgrounds including psychology, sociology, politics, economics and data science at a range of levels from undergraduate to PhD, however the interdisciplinary structure of the organisation enabled everyone to utilise their strengths. Currently HMCTS is going through a reform, which means that they are making a number of changes to their services so that citizens and users have better access to their services. This includes utilising technology to ensure that services can be provided a lot more quickly and efficiently while ensuring that those who have limited access to Internet are still able to access justice by another means (for more info see:InsideHMCTS). Being a part of this reform meant that the research I was involved in could be used to better inform the changes that the government makes to these services.

My work experience has been a fantastic one. Throughout the eight weeks I was given the opportunity to meet a number of colleagues to ask about their role and work in the organisation. In the office, my job was to collate research from a number of different sources including statistical bulletins and academic literature to update an insight pack, which was reviewed at the end of my placement. I went on many court visits to observe hearings of a range of cases from every jurisdiction (Crime, Civil, Family and Tribunals), enabling me to observe the role of each court user from ushers to barristers as well as the members of the public. This enhanced my understanding of both the court processes and the users’ experience including litigants, judges, ushers, barristers etc. Prior to starting, I expected only to be reading previous research and reports; I didn’t realise that I would also be immersed in the environment with the opportunity to directly ask the ushers and staff about their roles, thoughts and opinions. This was both a fascinating and useful aspect of my internship, as it developed my understanding of how users really felt and interacted with the courts; contextualising the potential issues different users may come across in the process.

The other reason I went to the courts often was to shadow and help conduct user research. This involved interviewing users of the courts and asking about their experiences. We also conducted user testing both in the courts and at labs. In the courts we asked people to fill out various prototypes of forms in development while asking them questions about what they were thinking at each stage of the process and also making any observation notes. This was the same for labs except many of us were making observation notes through a camera linked to the room. In contrast to academic research, I discovered that user research was very dynamic. Like in Agile software development, user research had a quick turnaround. This user-centred approach ensured that the forms were suitable for all users of the court by reducing user errors and subsequently improving the process. Any issues could be addressed not only at an early stage of development but also iteratively throughout the development process. The working environment was really friendly overall and provided a good work-life balance, having picnics in the park and the odd social after work.

Having grown up in a small town in Scotland, followed by the campus bubble of university, living in the capital city of London was a new experience for me. Although I wasn’t the biggest fan of the classic London tube transport and the high living costs, London definitely has its perks. Beyond my nine-to-five working hours, I visited many museums, art galleries and parks as well as the touristy spots such as Camden Market and Buckingham Palace. What I really loved about London was the liveliness, dynamic nature and diversity of culture; people from all different backgrounds and heritages all flocked to the big city of London. You never had to wait more than a few minutes to catch the next tube into the centre and the nightlife was always bustling. Here I was able to meet old friends and made new friends through work, activities and Taekwon-Do (my favourite hobby!). There is always something to do or see, from a fancy theatre production in Her Majesty’s Theatre to a variety of street performances in Leicester Square. This is definitely somewhere that I want to consider for my future masters or graduate job after I finish my current undergraduate degree in psychology.

Reflecting on my experience I never would have even considered that working, as a researcher in the government was a possible career pathway with a psychology degree, especially within the context of justice. I had always imagined the typical career pathway of becoming a clinical or forensic psychologist or even working in marketing and HR. However, having had this experience I learnt a lot about the law and the importance of how the court and tribunal services can impact citizens’ perceptions of our justice system. Over the summer, my personal development ranged from living independently in an unfamiliar environment to the professional skills at work. The research skills that I have gained such as critical thinking and analytical thinking as well as statistics through both my degree and in the workplace can have a real impact on society. Moving forward, this internship has inspired me to continue my studies at postgraduate level in behavioural sciences and has opened up the possibility of working within the Civil Service within research. I hope that other students in future years will also have the opportunity to experience such an exciting summer!