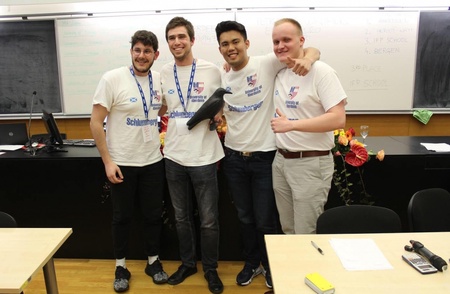 A team of petroleum engineering students from the University of Aberdeen has made it to the world finals of the annual PetroBowl competition organised by the Society of Petroleum Engineers (SPE).

The team of four students, who are members of the University’s SPE Student Chapter, recently scooped the top award in the European qualifiers which were held in Zagreb in Croatia.

The PetroBowl competition matches SPE student chapter teams against one another in a fast-paced quiz competition covering technical and nontechnical aspects of the oil and gas industry.

The Aberdeen team faced fierce competition from other universities who were represented in the qualifying round, including Stavanger, Heriot-Watt, Portsmouth and Bergen universities.

Nonetheless the team won all four knock-out stages to finish in top spot, meaning they will now travel to the global PetroBowl competition which is being held in the US in October.

This is the first time we have achieved such a high-calibre result and we are very proud of being recognised as the best team in Europe." Team member Viktors Stepovojs

Commenting on their success, team member Viktors Stepovojs said: “This is the first time we have achieved such a high-calibre result and we are very proud of being recognised as the best team in Europe.

“We’d especially like to thank staff at the University for supporting us with their knowledge and insight, without which our success would not have been possible.

“We’re now looking forward to representing the University on the global stage at the PetroBowl in Denver, where we will be one of 32 teams vying for the top prize.”

Team captain Filip Wejzerowski added: “The global PetroBowl is the most important and biggest event in the SPE’s calendar and we’re really looking forward to taking part.  For now, we are planning a short break and then we will resume our preparations for Denver while searching for sponsorship opportunities to help fund our trip.”