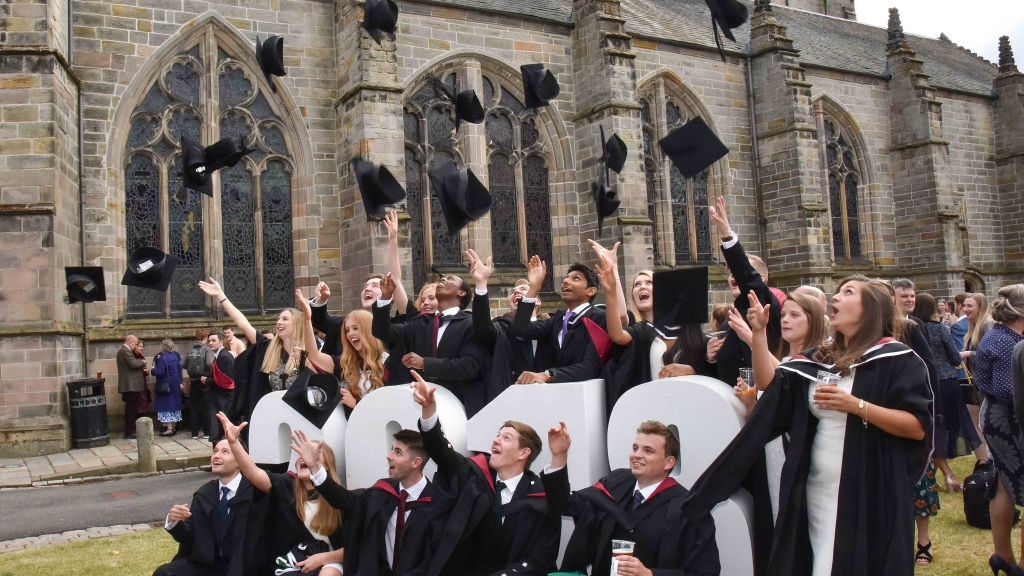 An internationally-recognised forensic anthropologist; an actor, presenter and author, and one of Scotland's foremost composers and conductors are among 11 distinguished individuals who will be honoured by the University of Aberdeen at its annual Summer Graduations next week (June 17 to June 21).

Aberdeen graduate Professor Dame Sue Black DBE - currently a Pro-Vice-Chancellor at Lancaster University - will be presented with an honorary Doctorate of Science (DSc) in recognition of the work she undertook when she led the UK response to war crimes in Kosovo, as well as work in Sierra Leone, Grenada, Iraq and in Thailand following the Asian Tsunami.

Sir Tony Robinson - one of the country’s finest comic actors, accomplished presenter in the archaeology TV series Time Team and also an ambassador of the Alzheimer’s Society - will receive a Doctor of Letters (DLitt), while Aberdeen-born composer John McLeod CBE will be presented with a Doctor of Music (DMus) in recognition of his ‘brilliantly coloured orchestral and vocal music’, which has been commissioned, performed and recorded in many countries.

A Doctor of Laws (LLD) will be bestowed on Her Excellency Dr Sheikha Aisha bint Faleh Al-Thani for her services to education, philanthropy and business. The Sheika is chair and founder of Al Faleh Educational Group, which is partnered with the University of Aberdeen on its Qatar campus, and which has made its mark in Qatar as a pioneering educational entity. The Sheikha also serves as a founding member of the board of Patrons of the World Congress of Muslim Philanthropists, a charitable foundation which mobilises financial and human resources to address global issues and advance efficient philanthropy.

Dame Carolyn Fairbairn DBE, the first female Director-General of the Confederation of British Industry, the UK’s largest business lobby group representing 19,000 companies, will be awarded a Doctorate of Honoris Causa (DHC). A former Director of Strategy at both the BBC and ITV, her current role is ensuring the interests of British businesses of all sizes across the UK are represented in Whitehall, Brussels and internationally.

Professor Michael Greaves, former Head of the School of Medicine and Senior Vice-Principal at the University of Aberdeen, will be honoured with a DSc for his outstanding contribution to medicine and higher education over four decades. A former President of the British Society for Haematology, the Scottish Haematology Society and the British Society for Haemostasis and Thrombosis, he was also an honorary consultant in clinical haematology with Aberdeen Royal Infirmary and served on the board of NHS Grampian.

All of our graduating students should take great pride in their achievements, and I hope they leave their ceremonies feeling inspired and ready to take on whatever comes next as they head out into the world." Professor George Boyne

Ronald Watt OBE, President of the National Karate Institute Scotland, who holds the title of 9th Dan black belt, the highest award bestowed by the International Karate Do Shihankai, will be awarded a Master of the University (MUniv). During his 55-year career as a professional instructor Mr Watt, from Aberdeen, has trained more than 20,000 students and qualified and taught over 3.000 Black Belts as high as 8th Dan.

Professor Dame Ottoline Leyser DBE, Professor of Plant Development and Director of the Sainsbury Laboratory, University of Cambridge, will be presented with a DSc for her services to plant science, science in society and equality and diversity in science.

Professor Sally Mapstone, Principal and Vice-Chancellor at the University of St Andrews, will receive an DLitt.  A distinguished medievalist a board member of Universities UK, a trustee of UCAS and of the Europaeum, as well as a member of the advisory board of the Higher Education Policy Institute. Professor Mapstone also leads on widening access work for Universities Scotland.

Professor Fiona Steele OBE, Professor of Statistics at the London School of Economics, whose principal interests lie in social sciences including the areas of education, family psychology and health, will receive a DSc, while distinguished clinician scientist and nephrologist Professor Sir John Stewart Savill, Chair of Experimental Medicine, University of Edinburgh, will be awarded a DSc. As Chief Executive of the Medical Research Council until 2018, he played a major role in shaping academic training for clinicians in the UK and developing the UK biomedical research strategy. He has also been Chief Scientist for the Scottish Government Health Directorates.

Professor George Boyne, Principal and Vice-Chancellor of the University, commented: “Graduations are a special time in the University calendar as it gives us an opportunity to come together to celebrate the achievements of our students and our new honorary degree recipients.