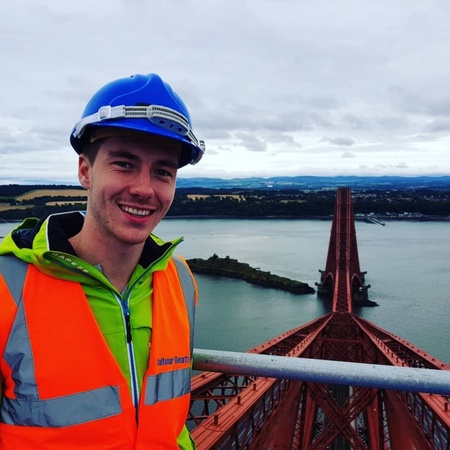 A postgraduate student from the University of Aberdeen will feature in a brand new Channel 5 series which will see teams of the nation's most talented railway modellers compete to create jaw dropping miniature masterpieces against the clock.

The series, The Great Model Railway Challenge, gets underway on Channel 5 tomorrow (October 5).

He is one of a six-strong team which will pit its modelling skills against two others in a heat to create a fully working railway layout, with operating trains, animations and static modelling scenery in just 24 hours.

The winners from each heat will then go on to complete in a grand final.

Ewan said he was delighted that the hobby he has enjoyed since childhood was being showcased on national television.

“It was a wonderful experience to be part of the Aberdeen team,” he added. “I have been interested in trains since my parents bought for me my first train when I was five and model railways are a hugely popular pastime with celebrity fans including Rod Stewart, Jools Holland and Roger Daltry.”

Ewan is a member of the Aberdeen Model Railway Club and says the timing of the series in ideal to promote renewed interest in modelling ahead of their long-standing annual show to be held at Dyce Hallmark Hotel on Saturday October 27 and Sunday October 28.

The club, which is based in Ferryhill near the Duthie Park, dates back 45 years and the 2018 exhibition will be its 39th. It will offer enthusiasts of all ages a chance to see a fascinating selection of model railways including the GMRC show heat layout (Clucas Bay), a new club layout based in Aberdeen, various layouts from all areas of the country and local societies and traders will be on hand to help those wanting to start building their own layouts.

Ewan added: “Our annual shows have demonstrated the enduring appeal of model railways in the north-east of Scotland and this is seen across the length and breadth of the country.

“Providing a showcase for that through The Great Model Railway Challenge is fantastic and I am really pleased to be a part of it, alongside my other Aberdeen team members. The show celebrates the diversity within the model rail community and it would be great if the show encourages more people to take up the hobby.

“It may seem to some like a niche activity but who’d have thought that a programme about baking cakes would become a national institution but Bake Off has shown just how well this type of show can work.”

The Great Model Railway Challenge is presented byJames Richardson, known for the World’s Strongest Man and The Totally Football Show and Tim Shaw from Car SOS. It will be judged by the editor of the UK’s leading railway magazine, Railway Modeller, Steve Flint and renowned master modeller and internationally acknowledged modelling vlogger, Kathy Millatt.

The series begins on Channel 5 on Friday at 8pm and the Aberdeen team will feature in a later episode in the series.