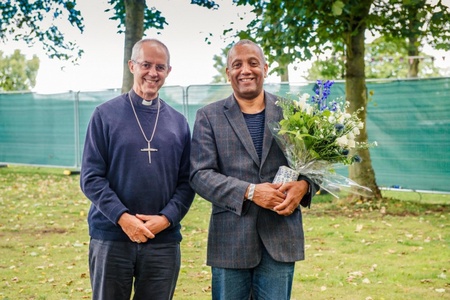 A fresh approach to dementia has earned an Aberdeen theologian a prestigious literary award which comes with a £10,000 prize.

Professor John Swinton is the 2016 winner of the Michael Ramsey Prize for his book Dementia: Living in the Memories of God.

The award is the ‘Man Booker of theology’ which celebrates the most promising contemporary theological writing and Professor Swinton was presented with the prize by the Archbishop of Canterbury, Justin Welby, at the Greenbelt festival.

Speaking about the winning entry, the Archbishop, who presided over the prize for the first time, said: “After much thought and struggle, we concluded that John Swinton's book should take the Michael Ramsey Prize this year. It is a cross-disciplinary book that goes straight to the heart of tackling one of the most profound failures of our society - the failure to value people in other than economic terms and to see the dignity of the human person.

"John has written a book which is deeply challenging and brings to bear a coherent theological approach, with clinical background and understanding, to an issue that has touched many of us, and is one of the great issues of our society. He has done the church and our country a huge service."

John has written a book which is deeply challenging and brings to bear a coherent theological approach, with clinical background and understanding, to an issue that has touched many of us, and is one of the great issues of our society. He has done the church and our country a huge service." The Archbishop of Canterbury, Justin Welby

“Even in something as apparently hopeless as dementia we can find new and hopeful possibilities if we learn to see things a little bit differently. I hope the book will help us see dementia differently and in so doing enable us to walk more compassionately with those people whose lives have been touched by it.”

The Very Reverend Professor Iain Torrance, Pro-Chancellor of the University of Aberdeen added:  “This is a simply wonderful result for John Swinton, and through him, for Aberdeen.  The most important work about dementia is deeply probing and reflective about human relationships.  John Swinton is at the forefront and we are greatly honoured by his distinction. “

Launched in 2005 by Rowan Williams, the Michael Ramsey Prize is awarded every two to three years and celebrates the most promising contemporary theological writing from the global church.

The 2016 Prize was judged by a panel including the Archbishop of Canterbury, the broadcaster and writer Sally Magnusson, Archbishop Josiah Idowu-Fearon, Secretary General of the Anglican Communion, Dr Anna Rowlands a Lecturer in Catholic Studies in the Department of Theology and Religion at Durham University and Professor Rosalind Searle, Director at The Centre for Trust, Peace, & Social Relations.