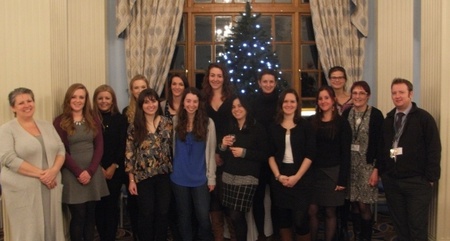 Students from the University of Aberdeen have been helping to inspire the next generation of language learners in Aberdeen city and shire.

They have visited schools across the region as part of a scheme run in conjunction with SCILT, Scotland's National Centre for Languages, which aims to encourage school pupils to continue learning other languages.

Professor Ed Welch, Head of the School of Language and Literature at the University of Aberdeen, said students nearing the end of their degrees in language made ideal ambassadors for language learning, with many having recently returned from a year studying abroad as part of their course.

“Across the UK we have seen a general decline in the number of people studying languages. Our students have bucked that trend to continue studying languages at degree level and our ‘language ambassadors’ have a real passion and enthusiasm for their chosen subjects.

“Language degrees have the benefit of a year studying abroad and students find this to be a great experience not only for honing their language skills but for immersing themselves in another culture.

“They have enjoyed the opportunity to share this experience with school pupils and the feedback from the schools has been very positive with many reporting an increased interest in pupils looking to take languages at Highers level.

“Learning a language has been shown to have many benefits including increased employability so this is a great way for our students to demonstrate the opportunities available in language study.”

Aberdeen City Council education and Children’s Services convener Councillor Angela Taylor said: “This is a fantastic scheme and anything that encourages youngsters to take up another language is to be congratulated.

Language degrees have the benefit of a year studying abroad and students find this to be a great experience not only for honing their language skills but for immersing themselves in another culture." Professor Edward Welch

“Having the students visit Aberdeen’s schools and impart their knowledge and love of the language, along with their experiences of living abroad, is extremely valuable to ensuring our youngsters continue with language studies.”

Pippa Robson, 20, who is in the third year of a joint honours degree in German and Sociology, spoke to pupils at Fraserburgh Academy and Ellon Academy.

She said: “I found it interesting going out to the schools and hearing about the ways they were learning languages and what they thought of them, many of the students were beginners and facing the same problems I faced when I began learning German. I am interested in pursuing a career in teaching so getting an opportunity to see what it is like in a real high school was a great research opportunity for me.

“The students responded positively to our visit and I think they enjoyed the presentation. I hope to be involved in a language assistant scheme in the coming semester.

Sophie Ward, 23, in in the final year of a degree in French and Hispanic Studies and visited several classes at Aberdeen Grammar.

She added: “I had never previously studied Spanish, but knew that that would be a strong language to have for entering the labour market after graduation. It was a great choice and I have learnt so much more beyond the language itself.

“The programme has been really beneficial in terms of consolidating my presentation skills and becoming confident presenting to students. This is something many of us had done on our year abroad, but it was good to be in the classroom environment again. Furthermore, it was nice to feel that we were potentially helping students form ideas with regards to future study. “

Amy MacKenzie, 23, visited her local school, Mackie Academy in Stonehaven, and Robert Gordons College. She said: “I really enjoyed visiting local schools and having the chance to interact with younger students, sharing my experience of studying languages with them and answering any questions they had. It was also great public speaking practice - in Mackie Academy I spoke to 300 S3's!

“I think the Language Ambassadors programme is a great way to volunteer whilst utilising your language skills and experiences.“