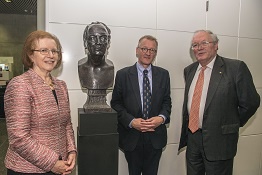 A bronze bust of Sir Duncan Rice, has been unveiled in the ground floor atrium of the magnificent library which bears his name.

Sir Duncan Rice was Principal and Vice-Chancellor of the University of Aberdeen from 1996 to 2010.

The bronze bust is the gift of a group of benefactors, and has been created  by leading Scottish portrait sculptor Alexander Stoddart, Sculptor in Ordinary to The Queen in Scotland.

The artwork was unveiled by Lady Susan Rice at a reception attended by leading supporters and benefactors to the University.

Welcoming the guest-of-honour, Professor Sir Ian Diamond - who succeeded Sir Duncan as Principal in 2010 - reminded those present of the long tradition held by the University of honouring former Chancellors and Principals in the artistic style of the day.

“Sir Duncan transformed the University,” said Professor Diamond. “He did this through raising intellectual fire-power with some brilliant appointments, strategic mergers – notably with the Northern College and the Rowett Research Institute – and elevating the global aspirations of the University community, a manifestation of which is the wonderful library in which we are now standing.”

Sir Duncan said: “I am totally delighted with this bust, and also that this gave me the wonderful experience of spending time with Sandy Stoddart – in my view the best portrait sculptor in the UK.”

The University of Aberdeen’s Sir Duncan Rice Library was formally opened in September 2012 by HM The Queen, and its name honours the vision, ambition and leadership of Sir Duncan Rice.

Edinburgh-born Alexander Stoddart studied at the Glasgow School of Art, and is best known for his public monuments of historic figures, such as the Robert Louis Stevenson statue in the Scots capital.

In 2008 he received the title of Her Majesty's Sculptor in Ordinary in Scotland in recognition of his outstanding contribution to culture. This is one of only two arts posts in the Royal Scottish household, the other being Her Majesty's Writer and Limner.