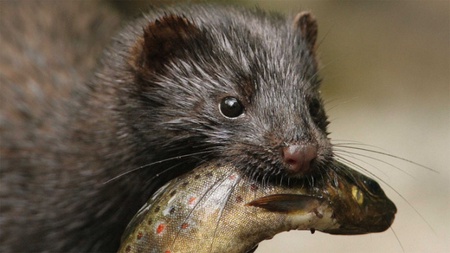 It is a non-native species which preys on water voles, ground nesting birds and salmon and causes significant damage to local ecosystems, but now the battle to remove breeding American mink from northern Scotland is being assisted by cutting edge computer technology.

The invasive mink were bred in UK farms between the 1920s and 1990s for fur and now breed in the wild causing significant problems for local ecosystems.

The Scottish Mink Initiative, the largest community-based invasive species management programme in the world, was set up in 2011 to clear northern Tayside, Aberdeenshire, Moray, and the Cairngorms National Park country of the animals with the help of fishermen, gillies, gamekeepers and local volunteers.

Now, researchers from the University of Aberdeen have developed software that allows the 450 volunteers across Scotland to easily log sightings of mink in the wild and receive detailed and easy-to-understand feedback.

Dr René van der Wal, from the University of Aberdeen’s dot.rural RCUK Digital Economy Hub and overseeing the project, explains: “Due to the geographical spread of volunteers across Scotland, communication has been a real challenge. We have developed a digital platform to efficiently bring together all mink-related data that volunteers collect. What’s more, using high-tech software, the volunteers can receive instant, up-to-date feedback in return”.

Large amounts of data are collected by the volunteers across the 29,000km2 focus area, and a computing technique known as Natural Language Generation allows immediate feedback to be generated for volunteers.

Dr Gemma Webster, a computer scientist at the University of Aberdeen, explains: “Upon record submission, a volunteer can choose what he or she would like to know more about: captures, sightings, own recording history, or mink ecology. Additionally, the volunteer can select a geographical scale so that more can be found out about mink on the local river, catchment or nationally.

“For instance, if a volunteer in the Ness and Beauly catchment opts for ‘sightings’ on a ‘catchment’ scale, the following text may be generated by the software: ‘In the Ness & Beauly catchment there have been 7 sightings of mink reported in the past 12 months which is lower than the previous 12 months. All your hard work seems to be paying off as there are fewer mink around’.”

The manager of the Scottish Mink Initiative, Chris Horrill, believes that this new technology developed by dot.rural offers at least two major advantages.

“Firstly, the volunteers can receive immediate feedback. Understanding the effect of one’s own work – and that of others – on mink populations, locally or nationally, can be a true reward for our volunteers and may boost their motivation. It means that the volunteers do not have to wait for the newsletter to come out, and can immediately learn about the value of their work.

“Secondly, the submission platform and central database give us the best possible insight into mink population dynamics in Scotland, which is crucial for coordinating local efforts on scales large enough to effectively deal with this species.”

The invasive American mink (Neovison vison) population found in the UK today descend from individuals that escaped or were intentionally released by animal rights campaigners.

American mink predate on a range of species in Scotland which have evolved without adaptations to cope with this predator. The impact of American mink on its surroundings can therefore be damaging.

As with other projects at dot.rural’s Natural Resource Conservation theme, such as blogging red kites (http://redkite.abdn.ac.uk/), the project is both innovative and impact-centred.

René van der Wal says: “The MinkApp project illustrates how academic research, technological innovation and hard work of volunteers on the ground can go hand in hand and have a very positive effect on the sustainability of the environment. As such, it can be held as an inspiring example for the use of technology in nature conservation in Scotland and around the world”.

The MinkApp project (http://minkapp.abdn.ac.uk/) was developed by scientists from the University of Aberdeen working together as part of the dot.rural RCUK Digital Economy Research Hub in collaboration with the Scottish Mink Initiative. The project is part of the dot.rural Digital Economy Research Hub www.dotrural.ac.uk, based at the University of Aberdeen and funded by a five year grant (2009-2014) from the Research Councils UK Digital Economy Programme. Rural areas have specific characteristics that create challenges around issues such as quality of life and wealth creation. We believe that rural areas of the UK can, through the user-led application of digital technology, be more economically, socially and environmentally sustainable. Our aim is to harness the Hub's expertise with a range of partners to realise this ambition.