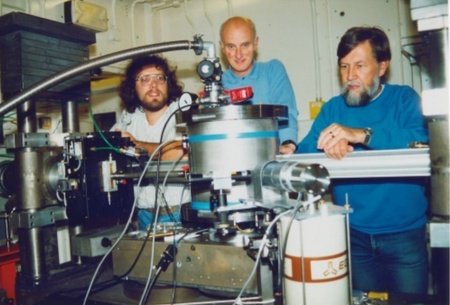 Our former colleague, John Reid, passed away on the evening of Sunday, 21 February. He had been suffering from cancer and some other illnesses but had kept in remarkably good spirits up to the very last days.

John first joined the University as an undergraduate in the Natural Philosophy (now Physics) Department in 1960. He concluded his degree under fear of quarantine and delay of the final exams due to the outbreak of typhoid in Aberdeen in 1964 – interesting given the past year – but they carried on and he obtained a First. He pursued a PhD with a Carnegie Scholarship under Dr Tom Smith on Diffuse X-ray Scattering, where he designed various pieces of apparatus both for use in the labs and at the fledgling neutron facility at Harwell.

In 1968, he was appointed Assistant Lecturer in Natural Philosophy, and while we could say that “the rest is history”, that would be to ignore the tumultuous times of the 1970s and 1980s. He worked first under the famous Professor R V Jones, who was the Head of Department from 1946-81, and dominated Aberdeen Natural Philosophy. The years following Jones’ retirement in the early 80s led to the closure of the Physics department, but John chose to stay and maintain a physics presence within the University via service courses. His commitment was rewarded when the University re-opened Honours Physics in the late 90s, and he helped design the new degree with a completely blank slate, resulting in some true innovation such as the Case Studies and Research Skills courses, both of which were well ahead of the game back then.

He was an amateur radio buff and golf enthusiast during his undergraduate years, and his enjoyment of tinkering continued into his well-known interest in the history of instrumentation; indeed, he was awarded an MLitt for his research into the instrument designer Patrick Copland. He moved from golf to boats; he and Aenea were keen sailors, with John passing his yachting qualification in 1973. His passion for the history of science was always there, and he was curator of the University’s Historical Instrument Collection from 1993.

John was latterly Head of Physics up to his retirement in 2007. He and Aenea, a fellow graduate and employee of the University, celebrated their Golden Anniversary just last year.

Those are the dates and times, but I would rather we remember John as the enthusiast that he was. He believed in good teaching and in his students and was always supportive and encouraging. From astronomy, to solid state to instrumentation, he covered it all. He was a physics magpie, and nothing went to waste, much to the frustration of many departmental technicians, cleaners, and fellow staff. His office was a complete and utter mess - “just move something” he’d say, if you were to sit down.

He had stories about everything that was physics and would hold court in a funny and informative way, from local stories about “RV” to those about historical figures. His passion for astronomy led to his being a Fellow of the Royal Astronomical Society and, as part of his courses, he would take students to the Glasgow Science Museum, which was always a great day out.

Full of ideas, enthusiasm, encouragement and anecdotes, he continued to contribute past retirement, especially to the museum’s collection, but also to outreach work, his virtual museum project and continuing in supporting students and staff – a quick conversation with John and you’d end up with new ideas – he was someone who embraced the changes in technology and in education. We will all miss him greatly.