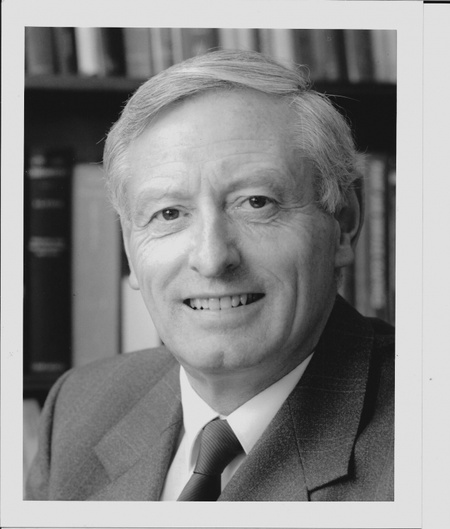 Alex Forrester had a long, varied and distinguished academic career. The same could be said of many others but Alex's unique claim to fame was that he was almost certainly the first, and probably the only person, to have started working life as a professional footballer and ended as Vice-Principal of an ancient University.

Alex was born in Fife, but his early years were spent in Alloa, where he attended Alloa Academy before going on to Stirling High School when the family moved to Bridge of Allan. In his schooldays, although clearly academically able, Alex most obviously caught the eye through his sporting ability. A natural at any ball game, his winters were devoted to football and his summers to cricket. After leaving school, he joined Sauchie, a well-known junior football club which that year won the Scottish Junior Cup. He soon attracted the attention of the football talent scouts and signed as a professional with Third Lanark – now defunct, but then very much alive. On the cricket field, he became a regular for Clackmannanshire, going on to win the Scottish County Championship.

Alex's first post-school job was as a laboratory technician with the Distillers Company, but he soon realised that to make progress away from the sports field he would need more advanced academic qualifications. Accordingly, he enrolled as a student at the then Heriot Watt College, graduating with a BSc in Chemistry in 1958. After graduation, and while still playing football, by now for Partick Thistle, he moved to Paisley Tech as a lecturer in Chemistry. However, by 1960 he decided to further develop his academic record and came to Aberdeen to join Dr (later Prof) Ron Thomson's Organic Chemistry research group as a PhD student. At this point, his professional football career ended. He was approached to join a Highland League club but opted instead for amateur local football, in which he continued for many years. On the cricket field he became a well-established regular in the Aberdeenshire team. While he did not progress as far as the Scotland team, he did at least make it into the dressing room and, for an extended period, onto the field as twelfth man when Scotland played Australia at Mannofield in 1964. Alex was in no way a flamboyant or instantaneously eye-catching sportsman: rather he was technically skilful, hard-working, competitive, totally committed, and nearly always in the right place at the right time.

After completing his PhD in 1963, Alex joined the Aberdeen University staff as an Assistant Lecturer in Organic Chemistry, progressing steadily through the ranks to become the senior Professor and Head of the Chemistry Department in 1987. En route to this position he was awarded the degree of DSc in 1976, and elected to the Royal Society of Edinburgh in 1982. A change of direction to senior management followed when he was appointed Dean of the Faculty of Science and Engineering in 1989, combining this with the post of Vice Principal (Science) in 1990. His final position was as Vice Principal for the development and commercialisation of the University's research base. He was the first Vice Principal to occupy this post and as Chairman of AURIS, the University's development and spin out company, he was instrumental in greatly enhancing the University's external profile. He was awarded the OBE 'For services to Science and Education' in the 1997 New Year Honours List.

In his research career, Alex's principal interests were in the fields of Free Radical Chemistry, Reactive Intermediates, ESR spectroscopy and Radiation Chemistry, leading to an output of over 120 research papers and three books. In addition, he gave numerous plenary and invited lectures in the UK, in Europe and occasionally further afield. At the time of his move from the Chemistry Department to become Dean and Vice Principal, Alex's reputation as a chemist was rapidly burgeoning on the international stage and there can be little doubt that if he had seen out his career as a chemist he would have reached the very highest levels.

Alex's approach to his work mirrored his attitude on the sports field. Although widely known and respected, initially in Scotland and the UK and increasingly internationally, he was not a natural networker or glad hander. He preferred rather to be judged on his output, which was invariably meticulously researched, carefully produced and intrinsically authoritative. All of this derived from a ferocious work ethic. Alex expected students, and particularly his research students, to work hard and he pushed them on. As a result, all 27 of his PhD students, plus four MSc students graduated successfully, with no failures, and many of them have gone on to highly successful later careers. Although demanding, he was not unfair: he had little sympathy for wasted talent but recognised and acknowledged commitment in those with perhaps rather less natural ability. His support was never ostentatious and he rarely talked about it but more than one wavering student was sustained in difficult times and quietly shepherded through to graduation.

In the final years of his career, Alex developed an increasingly painful limp, most probably a legacy from his footballing days, necessitating a hip replacement shortly before he retired. This was the only significant period of sick leave he ever had. A few months later a heart attack took him back into hospital for a triple bypass operation. All of this might have persuaded a lesser man to adopt a different lifestyle, but before long he was back on the golf course, as annoyingly competitive as ever. He eventually gave up about ten years later when he began to fail physically. His other major interest in these years was in the Aberdeen Grammar FP rugby club. Despite having stopped playing in favour of football, he had retained a keen interest in rugby and met Grammar FP club members socially from quite early in his time in Aberdeen. A regular spectator at home fixtures, he became increasingly involved, leading eventually to his election as the club President.

When he was diagnosed with developing vascular dementia in 2015, Alex tackled it in typically forthright fashion, contacting friends and former colleagues to tell them about it and warn them what to expect. With the support of his wife Myrna, he remained as active as he could for as long as possible but the apparent onset of Parkinson's disease in 2018 led to worsening problems with balance and mobility. Ultimately, a move to full time care became unavoidable.

The whole of Alex's career was built on the foundation of a secure and supportive family life. He and Myrna first met in Stirling at a dance in the Golden Lion Hotel, and they were married in Stirling in 1961, not long after Alex had started in Aberdeen. He took great pride in their four children - Deborah (a vet), Melanie (a dentist), Stephanie (Reader in Sports Mechanics and Bioengineering, Loughborough, and an Olympic triathlete) and Gregor (a lawyer). In addition to his adult grandchildren Ross, 23 and Rebecca, 21 his youngest grandson, Lauchlan was born in March 2020, two weeks before the Covid lockdown began.