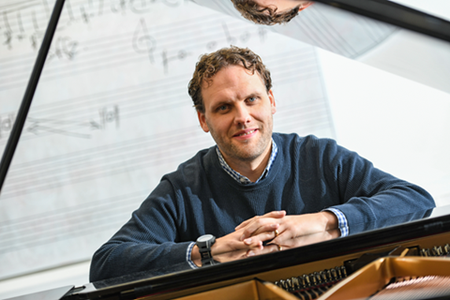 Like Distant Bells and Half-Heard Songs: Transfiguring a New Repertoire for Piano

‘Like Distant Bells and Half-Heard Songs’: Transfiguring a New Repertoire for Piano

During the dark days of the first national lockdown in 2020 I felt compositionally moribund, paralysed by the inertia of the confinement combined with regular missives about the super-creativity of composer colleagues via social media. Amidst this gloom and navel-gazing came the opportunity to write a short piano piece for pianist Duncan Honeybourne’s ‘Contemporary Piano Soundbites’ where he premiered a short new work every week day for nearly two months, all via YouTube on his gradually disintegrating home piano (a metaphor for much of what was happening at the time). This was one of the few times I felt creative and useful during this difficult period and I was very thankful for this opportunity. Later in the year, Duncan recorded my short work ‘The Turtle Dove’ along with many of the other soundbites for CD release, the reviews of which were extremely positive. One of the reviews referred to my piece as ‘A hushed and hauntingly effective deconstruction of the ballad of the same name’, another ‘But, alongside those names one meets Phillip Cooke with his beautiful transfiguration of the wonderful folksong The Turtle Dove.’ It was the latter of these two key terms that began the compositional process and aesthetic that I will discuss in my lecture and how this short piece has resulted in over eighty minutes of music all searching to transfigure and reimagine pre-existing material.

Phillip is Professor of Music and Head of Cluster at the University of Aberdeen, previous to this he held a Career Development Fellowship at the Faculty of Music at Oxford University and a Junior Research Fellow at The Queen’s College, Oxford. He is active as both a composer and a writer on music [feel free to use the term musicologist, but I know some of our colleagues don’t like me using that] with pieces regularly commissioned, performed and broadcast around the world. He was joint editor of The Music of Herbert Howells (Boydell Press, 2013) and the author of The Music of James MacMillan (same published, 2019), the first book on Scotland’s most prominent living composer. He is currently on sabbatical [well, sort of] where his focus has been on writing new repertoire for the piano, which he is going to talk about today.