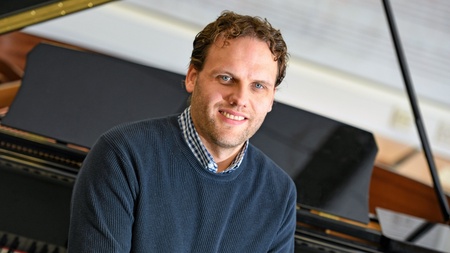 Join the next Composers' Forum at the University of Aberdeen Music Department with the Head of Music.

Dr Cooke’s music is strongly influenced by his native Lake District and by history. His main musical influences are found in continuing and reconciling a pastoral British tradition. In this Forum, he will give an insight into his more recent work as a composer.

Phillip Cooke was born in Cumbria in 1980, spending the first 18 years of his life in the Lake District. He studied composition in Durham and Manchester Universities and for a PhD with Anthony Powers at Cardiff University.

Recent works were featured in the London Festival of Contemporary Church Music, Lake District Summer Music Festival (LDSM), Tête à Tête Opera Festival, Musica Sacrae (Poland), Sound Festival (Aberdeen), St Magnus Festival, The Cumnock Tryst and the John Armitage Memorial (JAM) concerts. Works were performed in most of the leading cathedrals and churches in the UK. Recent works have been performed by, amongst others, the BBC Singers and The Sixteen. As of 2011 his choral works have been published by Novello and Schott. In 2012 he was a winner of the ‘Musica Sacra International Composers Competition 2012’ which led to performances in Poland and Lithuania, in 2016 he won the Gesualdo Six Composition Prize for his motet Judas Mercator Pessimus, in 2017 his anthem For He is Our Peace won the Tenth Annual Anthem Competition in Worcester, Massachusetts and in 2020 his work Ave Maria, mater Dei won the ORTUS prize. His work has regularly been premiered and broadcast on BBC Radio 3 and has also recently been broadcast on BBC Radio 4 and Classic FM. His large-scale choral/orchestral work Noah’s Fire was premiered in Chester Cathedral in November 2015. A CD of his choral works performed by the Chapel Choir of Selwyn College, Cambridge and Onyx Brass was released to great acclaim on Regent Records in April 2014, and the CD of The Eternal Ecstasy (again performed by Selwyn) including his motet of the same name reached the classical charts top 10 in August 2015. In 2017, his work The World on Fire featured on a number one in the classical charts performed by the Choir of The Queen’s College, Oxford. There are currently eight commercial recordings available featuring his music.

He is strongly influenced by his native Lake District and by history. His main musical influences are found in continuing and reconciling a pastoral British tradition; he has written articles on James MacMillan, Edward Elgar, Herbert Howells, Francis Pott and British Secular Requiems. He co-edited a book of essays on Howells which was published by Boydell and Brewer in October 2013 and wrote the first major study on MacMillan’s music that was published by the same publishers in June 2019. He is married with two children, lives in Aberdeenshire and supports Everton (for his sins…). From 2007 – 08 he was a Career Development Fellow at the Faculty of Music, Oxford University and a Junior Research Fellow (2007 – 10) at The Queen’s College, Oxford University. He was composition tutor at Eton College from 2011-12. In January 2013, he was appointed a Lecturer in Composition at Aberdeen University, becoming Deputy Head in 2015, Senior Lecturer in 2017 and Head of Music in 2018.

This event is held online on Zoom.
No registration required. Please click here to join.