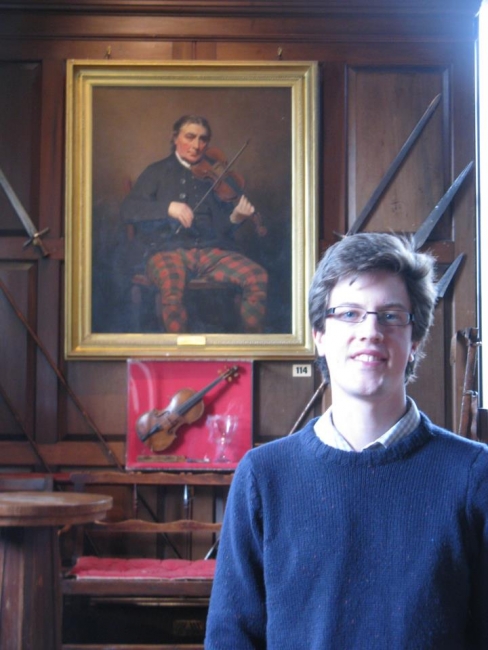 PhD candidate Ronnie Gibson has been invited to give a talk at the annual Scots Fiddle Festival in Edinburgh on Sunday 23 November.

Ronnie Gibson, a graduate student in the Music department and the Elphinstone Institute, has been invited to give a talk based on his current research at the annual Scots Fiddle Festival in Edinburgh later this month. The Festival, know affectionately as ‘Fiddle 2014’, features a range of concerts, workshops, and talks, and attracts performers and audiences from all over the world. Ronnie will be speaking about the roots of the present-day Scottish fiddle tradition in a talk entitled Niel Gow’s Legacy: Re-Evaluating the History of Scottish Fiddle Music.

While many people recognise the name Niel Gow, there remains a great deal of mystery surrounding the route his music took from his time in the eighteenth century to ours in the twenty-first. I'll be introducing some of my recent research on the topic and hope to set a few things straight!" Ronnie Gibson

Ronnie is no stranger to public speaking, having presented papers at a host of national and international conferences during his time as a PhD student, and his views on Scottish fiddle music are becoming well-known through the success of his research blog scottishfiddlemusic.com. Tickets are on sale now for his talk, which is taking place in the Summerhall Anatomy Lecture Theatre on Sunday 23 November at 2.30pm. For more details, please visit the Festival website at http://www.scotsfiddlefestival.com/fiddle2014/talks-sunday.html.