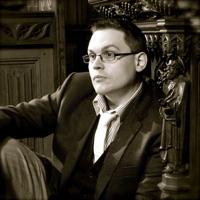 Paul Mealor commissioned to write a piece for the wedding of Prince William and Catherine Middleton.

Our very own Paul Mealor has composed a piece for the Royal Wedding.  Ubi caritas will be performed at the ceremony on Friday by the choirs of Westminster Abbey and of Her Majesty’s Chapel Royal, conducted by James O’Donnell.  Paul’s choral music is popular with singers and audiences alike, and has already met with considerable success.  However, this piece will be known by billions throughout the world.

Music by Paul was sung last October at the University of St Andrews by the combined choral forces of St Andrews, Aberdeen and Edinburgh universities, including Now sleeps the crimson petal, Lady when I behold the roses sprouting, and A spotless rose.

Paul Mealor joined the staff of the University in 2003.  Commissions have included instrumental works as well as opera, and he is particularly well known for his choral music.

Head of Music, Dr David Smith, remembers joking with Paul about his being commissioned to write something for the Royal Wedding, but of course Paul could not let on that this was indeed the case.  "It is such a tremendous accolade, and we are of course very proud of his achievement.  Paul's music is beautifully crafted, and popular with singers and audiences alike.  It will be quite something to hear Ubi caritas on Friday, and it is amazing to think how many people will be listening.”

Vocal music is a particular strength of the department in terms of performance, composition and musicology.  There are plans to introduce a new taught Master's degree in vocal music in which it will be possible for students to specialize in choral composition.