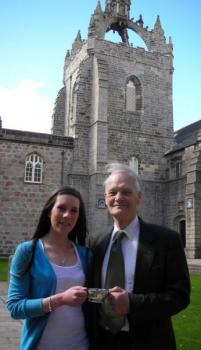 Entry is now open for the annual Ogston Music Prize, with finals set to take place on the 2st of May in the Cowdray Hall.

This year’s final of the Ogston Music Prize will take place on Sunday the 1st of May 2011 at 7.30pm in the Cowdray Hall. The panel of judges will be lead by Irene Drummond, acclaimed opera singer, and Donald Hawksworth, renowned pianist.

Applications to enter the competition are welcome from any matriculated student at the University of Aberdeen from 2nd year upwards (without restriction on subject of study or musical instrument/ voice). The winner will take home a cheque for £1,000 and will be expected to take an active part in the musical life of the University in the following year; performing in at least one graduation, a Wednesday teatime concert and will feature in the Ogston Music Prize concert in 2012.  The Aberdeen International Youth Festival will also offer a solo concert to the Ogston Music Prize winner.

A formalapplication detailing your instrument, proposed programme and musical experience should be sentor emailed to Rhona Mitchell (rhona.mitchell@abdn.ac.uk) at Room 003, MacRobert Building, King’s College, Aberdeen, AB24 5UA by Friday the 18th of February 2011

Auditions for the award will be held on Friday the 18th March 2011 from 2pm, in Johnston Hall.

Informal enquiries may be made to Dr Paul Mealor (p.mealor@abdn.ac.uk) in the Music Department.