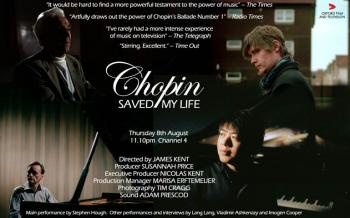 Momoka, is a 15-year-old pianist from Sendai, Japan, whose community was decimated by the 2011 tsunami and earthquakes. For Momoka, the Ballade embodies the anguish and rebellion she feels but doesn't allow to surface.

For 22-year-old Paul from Glasgow, the piece is life-changing. Paul grew up in Bellshill, a working class suburb of Glasgow. He first played piano at 15, and it opened up a whole new world for him. During his first term studying on the B.Mus (Hons) degree programme at the University of Aberdeen, Paul was diagnosed with a brain tumour and then MS which both eventually caused him to lose the ability to walk and to play with his right hand. Waiting in his hospital bed in between operations over three months, he played the Ballade again and again on the iPod his dad Stephen had given him. It was that single piece's emotional pull that Paul credits with the return of his memory.

Paul told us some more about his involvement in the programme:

"I have been for some time now transcribing the Ballade in g minor for the left-hand alone. The reason being I played this piece back in high school and with the medical complications lost the ability to play perhaps my favourite piece of all time. Luckily for my this piece was going to be the subject of a major documentary and with my story and attachment to the Ballade I was selected to be involved!"

The film includes interviews with some of the world's greatest pianists including Stephen Hough, Lang Lang and Vladimir Ashkenazy. It was shown on Channel 4 in August and trailers can still be viewed on YouTube: http://www.youtube.com/watch?v=3J6KDmTE0F0 / http://youtu.be/4JM_KELsU4c

The documentary was awarded 2nd place in the 'Halo' Best Arts Documentary award category at the awards ceremony on Monday, 4 November 2013 at the Queen Elizabeth Hall at London’s Southbank Centre. The ceremony was filmed and shown on Sky Atlantic.