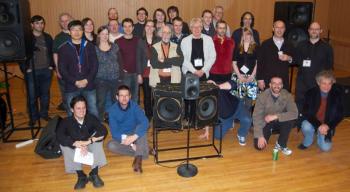 This year's sound festival ended with a day of events curated by Pete Stollery which brought to Aberdeen some of the most exciting current research in music and technology in the UK.

Students and academics from De Montfort, Birmingham, Manchester, Edinburgh, Sheffield and Kingston Universities, along with RSAMD performed in 5 concerts throughout the day in the MacRobert Lecture Theatre on a loudspeaker diffusion system of over 60 channels provided by BEAST (Birmingham Electrocoustic Sound Theatre). Two workshops and a number of sound installations around the building attracted many people from young children to seasoned electroacoustic concert-goers.